News » TECH » You can edit sent messages on WhatsApp. Here is the details

You can edit sent messages on WhatsApp. Here is the details 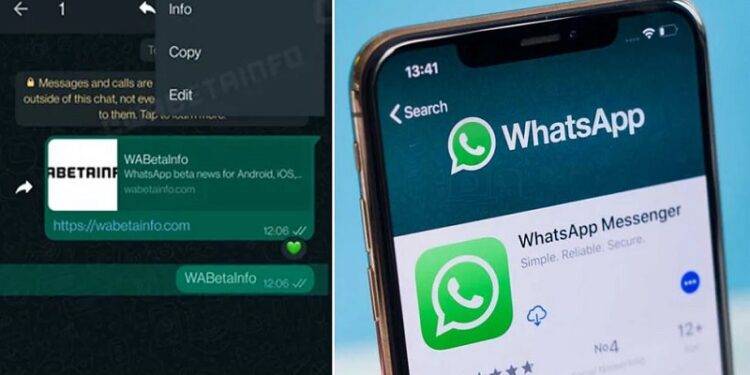 WhatsApp New Features: WhatsApp is working on another surprise update. That is the edit option (Edit feature). It means the message you sent on Whats App has been edited. You can edit sent messages on WhatsApp. Here is the details.

The famous messaging application Whats App owned by Meta is getting closer to the users through one or the other features. Mainly WhatsApp introduced the most updates this year and became the favorite app of the users. From emoji reaction to the message, increasing the time to delete the message, logout option in a few days, the option to delete the message to the group admin and so on, it is going to introduce many features. You can edit sent messages on Whats App. Here is the details.

Meanwhile, Whats App is working to bring another surprise update. That is the Edit Feature. That means you can edit the message sent on WhatsApp.

Wabetainfo has reported about this and said that Whats App will soon provide an option to edit messages. This will help to correct the wrong letter if the user sends a message to others. Currently this option is available in Android beta version. The existing Delete for Everyone option deletes the entire message. However, this edit option is to correct the character instead of deleting the message.

WhatsApp ban on these iPhones:

It has indicated that the Whats App will no longer be supported permanently on some iPhone models from October 1, 2022. WhatsApp has already sent a warning message to iPhone users running the app on iOS 10 or iOS 11 versions. The Whats App messaging app has sent a notice to users about this, saying that Whats App will soon stop working on your phone.

Thus Whats App has sent a message that users need to update their iPhones to continue using the app. WhatsApp will stop working on iPhone 5 and iPhone 5C phones. WhatsApp will work seamlessly on iPhones running Apple iOS 12 or later.

Fever cases increased in children: Holiday announced for these schools