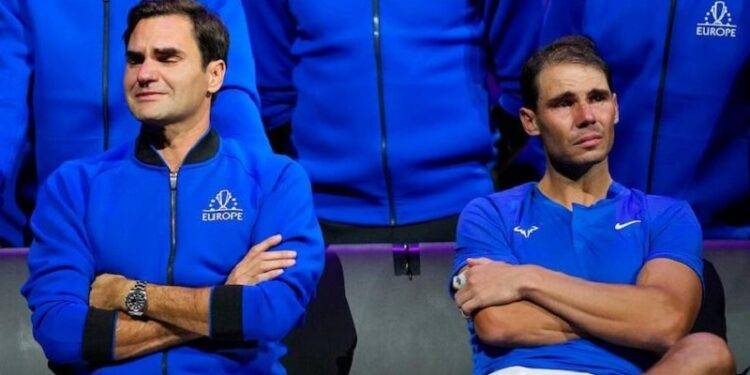 LONDON: Tennis legend Roger Federer’s two-decade career has officially come to an end after losing the Lever Cup men’s doubles final to Rafael Nadal. After the match, it was an emotional moment for the fans as well as the tennis players on and off the tennis court. Virat Kohli shared a photo of Roger Federer-Rafael Nadal crying.

After the match, Federer burst into tears uncontrollably. At this time, Rafael Nadal, who was next to him, was also shocked. This video and photos have gone viral on social media. Noticing this, Virat Kohli, the former captain of the Indian team, praised the scene of Rafael Nadal crying with Roger Federer with special words.

Virat Kohli, who shared a photo of Federer and Rafael Nadal crying on his official Instagram account, called it “the most beautiful picture he has ever seen in sports”.

“Who would have thought that rivals could feel this way about each other. That’s the beauty of sports. It’s the most beautiful picture I’ve ever seen in sports. When your teammates are crying for you, you know what God has given you to do. I respect these two. Roger Federer-Rafael Nadal,” tweeted Virat Kohli in an emotional post.

Rafael Nadal, who has faced Roger Federer many times in his tennis singles career, looked quite emotional in the moments of his rival’s last match.

“I am very proud and honored to be part of the most amazing moment in the history of the sport of tennis. We have shared a lot over the years,” said an emotional Nadal of Spain.

Last week, in a statement posted on his official Twitter account, Roger Federer announced his decision to retire. He won the first Grand Slam of his tennis career by winning the Wimbledon Championship in 2003. Since then, he has won a total of 20 Grand Slams including 6 Australian Open, 1 French Open, 8 Wimbledon and 5 US Open.