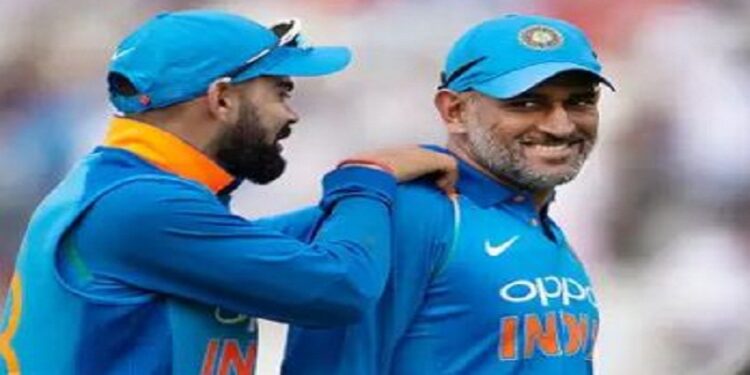 Mahendra Singh Dhoni, the former captain of Team India, is one of the greatest leaders the cricket world has ever seen. MS Dhoni is the only captain in the world who has won ICC T20 World Cup, ICC ODI World Cup, ICC Champions Trophy.Virat Kohli revealed an interesting fact about his relationship with MS Dhoni

Kohli is one of the cricketers who flourished under Dhoni’s leadership. Dhoni and Kohli have a friend, guru-disciple relationship. While Dhoni was the captain of the Indian team, Kohli was the vice-captain for a long time. Now Virat Kohli has revealed an interesting fact about his association with Dhoni in the Indian team. Posting a photo with Dhoni, Kohli tweeted that being his vice-captain was the happiest and most exciting period of my career.Virat Kohli revealed an interesting fact about his relationship with MS Dhoni

Being this man’s trusted vice-captain was the happiest and most exciting period of my cricketing career. Our association is always special for me. 7+18,” tweeted Virat Kohli. Dhoni has played an important role in Virat Kohli’s cricket life. Dhoni recognized Kohli’s talent in international cricket and created more and more opportunities.

Not only that, it was MS Dhoni who chose Kohli as his vice-captain. Later, while believing that Virat Kohli is ready to lead the team, he gave up the captaincy position to Dhoni Kohli. Even when Dhoni announced his retirement from international cricket, Kohli had tweeted, “He will always be my captain.”

Virat Kohli is currently in Dubai for the Asia Cup tournament and is confident of regaining his lost batting form. The Asia Cup tournament begins tomorrow (Saturday) and defending champions India will begin their campaign against arch-rivals Pakistan in their first match at the Dubai International Cricket Stadium on Sunday.