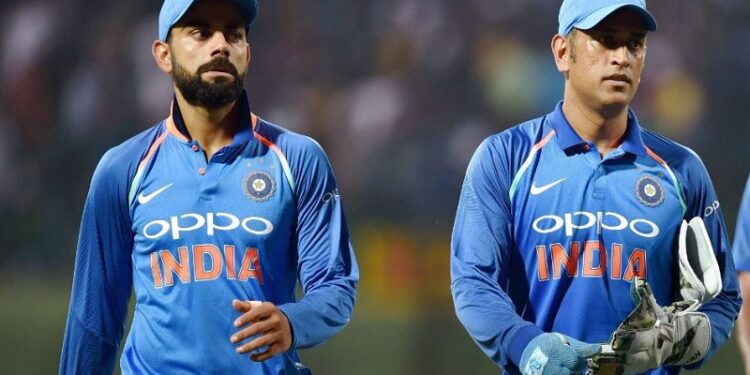 India’s talisman is back in form as Virat Kohli smashed his second half-century in the ongoing Asia Cup 2022. Kohli proved yet again that he shines under pressure, smashing a stroke-filled 44-ball 60 against his favourite opposition, Pakistan in the Super 4 match at the Dubai International Stadium. In recent development Virat Kohli finally breaks silence on MS Dhoni.

Virat Kohli has revealed that only MS Dhoni personally sent me a message when he quit the Test captaincy in 2022. See what he said here. When I quit Test captaincy, I only got a message from one person who had played with me before. It is M. S. Dhoni. Many have my mobile number. Many people are giving advice on TV. But apart from Dhoni, no other person with my number has texted me,” Kohli said.

“I have respect for everyone. I am connected with some people. But, I don’t want anything from them. They also get nothing from me. This is what it looks like when you have real respect with someone. Because they depend on each other.” “If I have to tell someone about the game, I go to them individually. I will do the same even if I need advice from someone Virat Kohli said.

If you want to come forward and give suggestions I will not value it at all. should be discussed with each other. Get it honestly. I am a very honest person. I have played cricket honestly for so long”, said Kohli. Apart from India’s explosive start in the match against Pakistan, no batsman other than Virat Kohli stayed at the crease for a long time. Kohli joined the pavilion by being run out in the last over in Asia Cup 2022.

In addition to this, some documents were also added to his account. Kohli is now the batsman who scored 50+ runs most times in T20 cricket. Earlier this world record was held by Rohit Sharma. Kohli has scored a total of 32 fifties in T20 cricket. With his brilliant knock against Pakistan, Kohli surpassed India skipper Rohit Sharma as the batter with the most fifty-plus scores in T20I cricket.

He has 32 fifties in 94 innings for India, one more than Rohit, who has represented India in a record 135 matches in the shortest format of the game. The fighting knock was Kohli’s fourth fifty-plus score against Pakistan in T20Is. He has scored the most number of fifties against Pakistan in T20Is and is at the pinnacle of a list that includes England veteran Kevin Pietersen, renowned New Zealand batters Martin Guptill and Kane Williamson, and Australia’s white-ball captain Aaron Finch.

Also Read: India Vs Pakistan: Virat Kohli say about that one catch that Arshadeep dropped