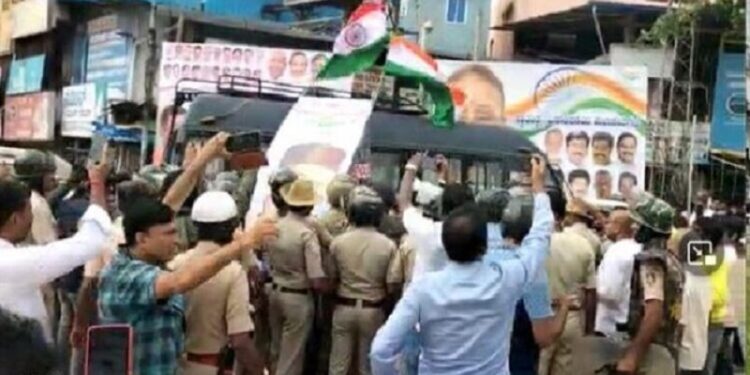 There is a tense atmosphere in the city due to the Veer Savarkar Flex controversy. Shivamogga situation tenser; two people were stabbed within 2 hours. Prohibitory orders under Section 144 have been enforced in Shivamogga city and Bhadravati as a precautionary measure. Veer Savarkar poster controversy: declared schools and colleges holiday tomorrow August 16.

Therefore, a school and college holiday has been announced holiday tomorrow in Shivamogga and Bhadravati. District Collector Selvamani has issued an order in this regard and said that in view of the implementation of Section 144, all the schools and colleges of Shimvaogga city and Bhadravati town have been declared holiday on 16/08/2022.

Thus the situation in the city was tense. Due to this, prohibitory orders under Section 144 have been enforced in Shivamogga and Bhadravati cities for three days from today. The Karnataka Police on Monday imposed prohibitory orders in parts of Shivamogga district after pro-Hindu activists protested against attempts to remove Savarkar poster controversy put up at Ameer Ahmed circle on Independence Day. Shivamogga situation more tense; two people were stabbed within 2 hours.

A row had erupted after the poster was put up today. A few Muslim youth protested against the poster put up by pro-Hindu groups. The victim, identified as Prem Singh, has been shifted to a local hospital for further treatment. The motive behind the attack was not immediately known. According to the Karnataka home minister, the stabbing incident is likely due to the ongoing Savarkar photo issue in Shivamogga.

“One stabbing incident has happened in Shivamogga is what I’m told. Is it regarding Savarkar photo issue, it seems like it. But yet to get full details,” Karnataka Home Minister Araga Jnanendra told media. The Karnataka Police has imposed prohibitory orders in parts of Shivamogga district and shops have downed their shutters.

Earlier on Monday, pro-Hindu activists protested against a few Muslim youth who demanded the removal of Savarkar flex. In a similar incident, the banner erected at the Surathkal junction in Mangaluru naming the circle after Veer Savarkar was removed after Social Democratic Party of India (SDPI) workers raised objections to it.