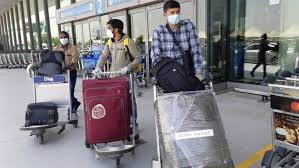 The passengers were among 171Indians from the northeast of the country who were repatriated on the second direct flight from Dubai to Guwahati on Thursday. Dubai-based businessman and head of the Ajmal Perfumes brand, Amiruddin Ajmal, donated Dh100,000 to pay for the tickets of 66 passengers who could not afford their repatriation tickets, community volunteers who facilitated the chartered flight service said. But what also won hearts was a gesture by a DPS Sharjah Grade 8 student, Ananya Srivastava, who opened her piggy bank to pay for two more passengers’ tickets.

Thursday’s flight was the second one after a flyDubai chartered plane travelled for the first time from Dubai to Guwahati on July 3.

“Our first direct flight from Dubai to Guwahati was a historic one because that region of India is not connected by any commercial flights. But ever since that flight, the number of Indians from the northeast who wished to be repatriated have only grown, so we partnered again with Satguru Travel and Tourism to make our second chartered flight possible,” said Angam Keishing, a volunteer who, along with a group of friends from northeast India, rallied passengers and sponsors for the July 23 flight.

According to the Indian Embassy in the UAE, more than 450,000 people have registered for repatriation. While state-run carrier Air India was initially the only airline allowed to operate repatriation flights, the government has since allowed private companies to fly chartered planes.

Many of them have been laid off by their employers, some are on unpaid leave and some were waiting to fly back because of medical urgencies. Since no commercial flights are flying to any northeastern state, the chartered flight service is the only hope for many. Otherwise they will have to spend huge amounts of money on mandatory quarantine if they land in any other city.