News » LATEST NEWS » Tribals carry dead body on pole, due to no roads in village 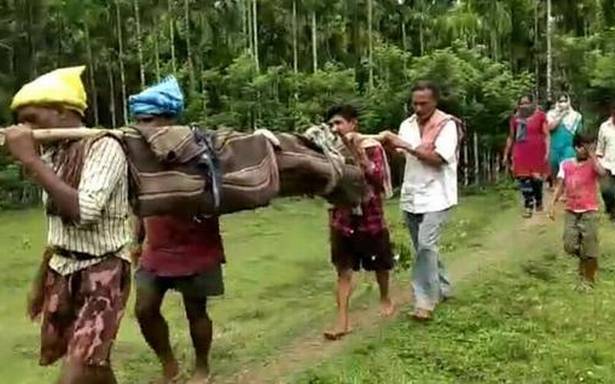 Mudigere: Tribals of Mannakumbri near Kalakodu-Megalamakki in Mudigere taluk of Karnataka had to tie the body of a woman of the community to a pole and carry it back as their hamlet has no road connectivity.

Sharadamma, 55, died at a private clinic at Kalasa on Monday. With the help of locals, the family could carry the body in a vehicle only up to Kalakodu-Megalamakki. However, as no road led to their hamlet where three families stay, her husband Chandu Gowda and others wrapped the body in a blanket and tied it to a pole so that they could carry it home.

Vijay Kalakodu, a resident of Kalakodu, among those who helped carry the corpse, said there had not been a road between Megalamakki and Mannakumbri for ages. “The distance is about two km. For years, they have been demanding a road, but to no avail,” he said. A couple of years ago, he remembered that Sharadamma’s son Uday had suffered serious injuries after falling from a tree. He had multiple fractures. The family faced difficulty in bringing him often to the hospital. “Uday died as they could not take him to a hospital due to the lack of a road,” he added. There are a few such hamlets in Mudigere taluk with no road connectivity. “People of the Gowdlu tribe reside in such hamlets. They hardly come out. A majority of them are agriculture labourers and work in farms and plantations nearby,” said Lakshman Achar, a resident of Kalasa.

The taluk administration took note of the incident and sent a team from the Samse Gram Panchayat to the village on Wednesday. M. Venkatesh, Executive Officer, Mudigere TP, told “The distance between the main road and the hamlet is about 500 m, not 2 km as claimed. They have choice but to walk across private land holdings,” he said.

He said laying a road for the hamlet would include the construction of a bridge. This would require huge funds and could be taken up only if elected representatives provided money from the local area development fund.

“The GP has funds for the mud road. However, to lay the road, owners of private land have to part with their land. So far, they have not agreed to this,” he added.