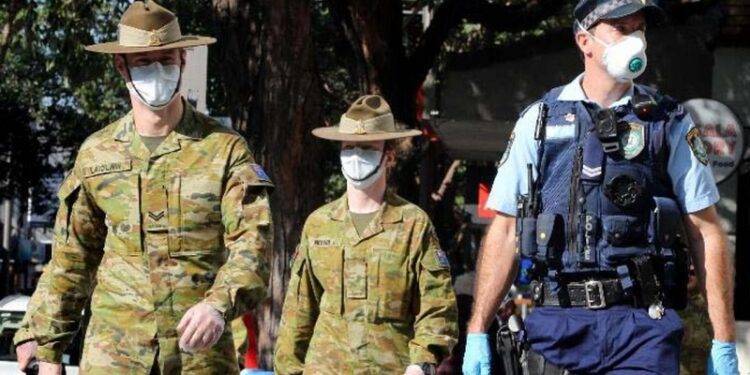 Sydney: As daily COVID-19 cases hover near record highs in the city. More Australian military personnel will be deployed to enforce tighter Covid-19 restrictions in the greater Sydney area next week, authorities announced Saturday, as the entire state of New South Wales (NSW) prepares to go under lockdown.

It comes as the country continues to battle the highly infectious Delta coronavirus variant. On Saturday, NSW reported 466 new locally transmitted cases a record to take its total number of infections this year to 12,903. NSW Premier Gladys Berejiklian called it the “most concerning day” of the pandemic, adding the state was “throwing everything at it.”

“This is literally a war,” she said at a news conference, shortly before the state’s deputy premier announced NSW would enter a snap seven-day lockdown starting 5 p.m. Saturday. Stay at home orders will be applied across the country’s most populous state, with people only permitted to leave home to shop for essentials, receive medical care, outdoor exercise with one other person, and work if residents cannot work from home.

Schooling will also be moved back online. Sydney, the capital of NSW, has been under lockdown measures for more than seven weeks now, and they will likely be extended further; they were set to end on August 28 but the state government has indicated restrictions will remain through September.

Australia’s Department of Defense said on Friday it had received a request for extra personnel to help support police to enforce home-quarantine orders in Sydney’s worst-affected suburbs. More than 500 army personnel are already helping police in the city, which has a population of about 5 million people, including monitoring compliance activities at hotels and airports.

An additional 200 personnel will be deployed starting Monday. They will be part of Operation Stay at Home, which also launches Monday, in which residents must stay within a 5-kilometer (about 3.1-mile) radius of their home, Berejiklian said Saturday.