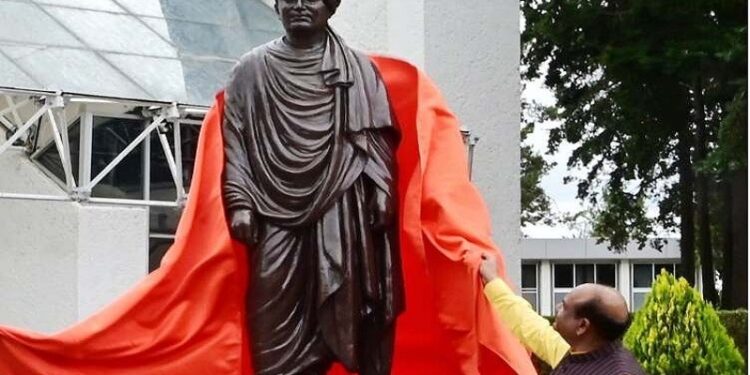 Speaking at the unveiling of Swami Vivekananda’s statue in Mexico on Saturday, Lok Sabha Speaker Om Birla said his teachings to humanity transcend geographical barriers and time. Swami Ji’s message and teachings of humanity transcend geographical barriers and time. His message is to all mankind. Swami Vivekananda first statue unveils in Mexico.

Today, by unveiling his statue in Mexico, we pay our humble tribute to him,” he said in a tweet. Om Birla unveiled a statue of freedom fighter Dr Pandurang Khankhoje at Chapingo University, Mexico. Birla also visited Chapingo University, the oldest agricultural university in Latin America. Birla met the President of the Chamber of Deputies in Mexico Santiago Creel.

The two leaders discussed many issues of mutual interest. India and Mexico have historically had close ties and Mexico was the first country to recognize India as an independent country in 1947. He said that relations between the two countries have grown from strength to strength in terms of trade, economy and culture.

Birla said that both countries are sharing good ideas to strengthen parliamentary democracy in the world. Earlier, the Lok Sabha Speaker inaugurated the India-Mexico Friendship Garden at the Mexican Parliament Complex. He hoped that the India-Mexico Friendship Park, a symbol of the strength of the bond between the two countries, would spread the power of democracy to the entire world.

He thanked the Mexican Parliament and Government for their commitment to strengthen ties with India. He was invited to unveil a statue of Swami Vivekananda in Mexico. This is the first statue of Swamiji in Latin America. Om Birla tweeted that this statue will inspire the youth of this country to work hard to lead their country to new ideas.