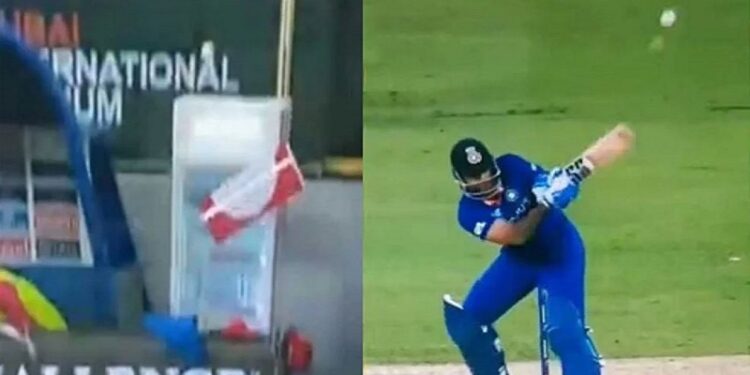 India vs Afghanistan bid farewell to the tournament by meeting for the last time in the Asia Cup 2022 at the Dubai International Cricket Stadium on Thursday. In this match which was only one sided, Team India won by 101 runs. Suryakumar Yadav Explosive six shatters fridge in Afghanistan dugout: Video.

The main highlight of the entire Asia Cup 2022 match was Virat Kohli’s century. It was a century after 1021 days. KL Rahul and Rishabh Pant gave him good support. Meanwhile, Suryakumar Yadav, who came in to bat at number three, left early. However, before he got out, a video of a six is now going viral.

After losing the toss and going into bat in India vs Afghanistan match, India got off to an explosive start. As Rohit Sharma was rested, KL Rahul started the innings with Virat Kohli as captain. While Kohli played cautiously in the power play, Rahul batted superb. He scored 61 runs in 41 balls in a must play match. Suryakumar Yadav came to the crease after KL Rahul departure.

Surprisingly, Suryakumar Yadav hit the ball for a six with his different shot in the very first ball he faced. In the 5th ball of the 13th over, Fareed Ahmed hit fine leg for a six and the first ball he faced. The ball that went to the left went straight to the Afghanistan dugout and hit their fridge. The glass on the fridge was shattered by the impact of the ball in Dubai International Cricket Stadium .

Chasing the target, Afghanistan was crushed by the Bhubaneswar swing attack. By the time 21 runs were reached, the team had lost 6 wickets. Ibrahim Zadarn fought alone by scoring 64 runs. In the end, Rashid Khan scored 15 and Mujeeb ur Rahman scored 18 runs. Finally, the Afghan lost 8 wickets and scored 111 runs in 20 overs. Bhuvneshwar shone for India by taking 5 wickets.