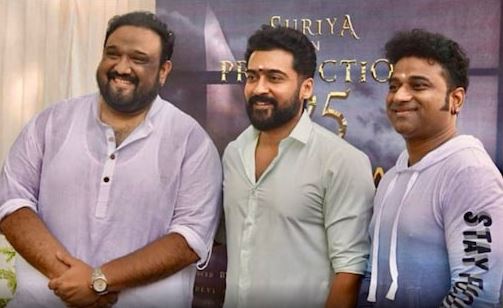 The Actor Suriya starrer, billed as “The Prestigious Mega Project”, also features Disha Patani in lead roles along with Yogi Babu, Redin Kingsley, Kovai Sarala, and Anand Rah in supporting roles director Siruthai Siva. Surya is the most versatile and exceptional actor in the Indian film industry. He made a powerful impact on movie lovers with his performances in films like Soorarai Pottru and Jai Bhim.

He linedup his next referred to as Surya’s 42 under the direction of Shiva. The project kickstarted its regular shoot few weeks back and according to the latest, the makers released the motion poster. The motion poster captivated all making waves on social media. the motion poster carries an intense vibe and it gives a glimpse of Suriya’s characterization and looks in the film.

He looks sharp and dapper in the motion poster Surya 42. Devi Sri Prasad’s background score for the motion poster and the visuals gel well to create a lasting impact. There is a lot of grandeur in the film. Dazzling beauty Disha Patani is the female lead in the film produced by KE Gnanvel Raja, Vamsi and Promod on Studio Green and UV Creations banner. The film is releasing in an extravagant manner in ten languages.