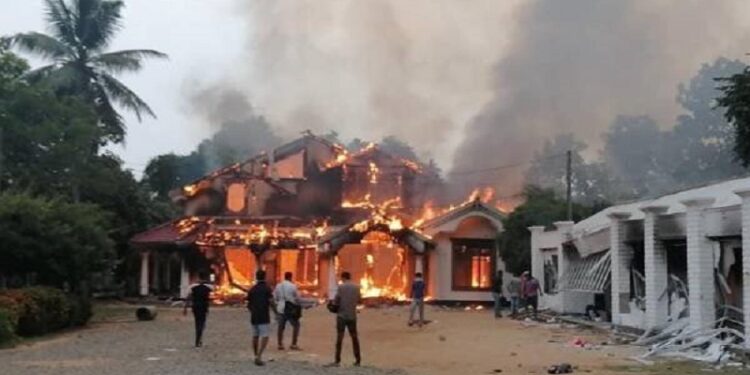 Sri Lanka’s PM Mahinda Rajapaksa quit on Monday to make way for a unity government, in a bid to find a way out of the country’s worst economic crisis in history, but protesters said they also wanted his brother, Gotabaya Rajapaksa, to stand down as president. Sri Lanka Rajapaksa family home burnt down amid clashes; kills 5, including MP.

The PM’s resignation came hours after clashes broke out in Colombo and elsewhere, killing five people, including an MP, and wounding almost 200. Ruling party parliamentarian Amarakeerthi Athukorala died after a standoff with anti-government protesters near Colombo.

Sri Lanka was placed under curfew as loyalists of Prime Minister Mahinda Rajapaksa and anti-government protesters clashed today. A ruling party MP died and many were injured. Mr Rajapaksa has resigned, leading to the collapse of the government. The hugest clashes since the economic crisis hit the island nation, started this morning when supporters of the Rajapaksa family went on the rampage.

The loyalists attacked unarmed protesters camping outside the President’s office in downtown Colombo since April 9. By evening, the protesters hit back, setting fire to buses, destroying the memorial built for the parents of President Gotabaya Rajapaksa and his brother Mahinda Rajapaksa and setting ablaze their family home in Hambantota, around 250 km from Colombo.

The houses of three former ministers and two MPs were also torched.  The police fired tear gas shells and water cannon and declared an immediate curfew in Colombo, which was later widened to span the country of 22 million people. At least 100 injured people have been hospitalised.

Shimron Hetmyer becomes father for first time, out from IPL 2022