by News Next Desk
in CRIME
A A 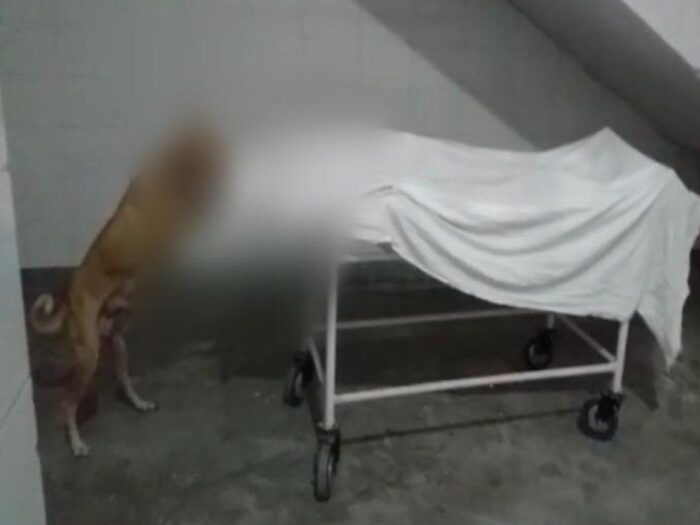 Sambhal: A video of a stray dog nibbling at the dead body of a girl inside an Uttar Pradesh government hospital in the state’s Sambhal district has caused widespread outrage. The disturbing incident took place on Thursday after the girl was brought to the hospital following a road accident.

It’s not clear whether she died before reaching the hospital. A 20-second video shared widely on social media shows a dog nibbling at what appears to be a dead body covered by a white cloth lying on a stretcher in an isolated area in the hospital.

The family of the victim has blamed the hospital for negligence. The hospital administration has acknowledged the stray dog problem. “It was left unattended for 1.5 hours. It’s negligence of the hospital,” Charan Singh, the father of the girl was said to media.

The hospital administration told media there was indeed a stray dog menace inside the hospital and that they had written to local civic authorities, but no action was taken. However, in this case, the Chief Medical Superintendent of the hospital claimed they were not to blame. “The body was handed over to the family after formalities.

They didn’t want an autopsy and were taking it away. They might have left the body unattended for a minute when the incident happened,” Dr Sushil Verma said. The Samajwadi Party, who also shared the horrifying video on Twitter, called for strict action against those responsible.

Terming the incident “very serious”, Dr Sushil Verma said a wardboy and a sweeper had been suspended, and an explanation has been sought from the doctor on emergency duty and a pharmacist. “After investigation we found out the sweeper and ward boy were responsible. They too had had a lot of bodies to deal with.

However, we have suspended them. And we have sought an explanation from the doctor that was on emergency duty along with the pharmacist. We have also formed a committee to investigate the matter and further action will be taken based on that,” Dr Verma added.

Wall writing in favour of terrorism in Mangaluru