Schools holiday declared in this district tomorrow due to heavy rain 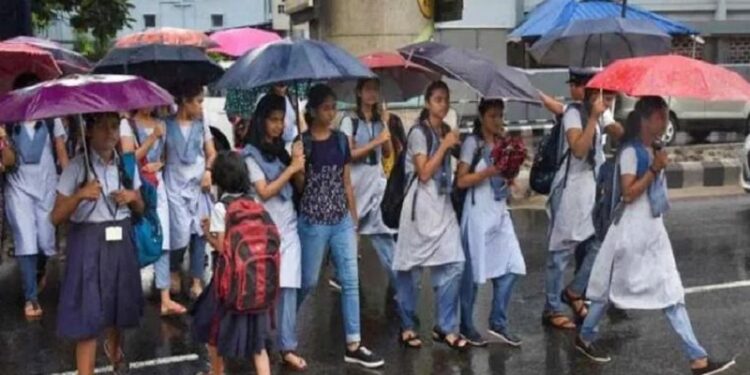 As record-breaking rains bring life to a halt in many parts of Karnataka, met departments have reinstated red warnings over many parts of the southern state. Now, new forecasts indicate a strong possibility of similarly intense rains across the state for the next four days at least. Schools holiday declared in this district tomorrow due to heavy rain.

Monsoon rains have intensified in the state. Already in some districts people have been distruffed by the incessant rain. Due to heavy rain, the lake and the pond are overflowing and all the crops are flooded. Especially in Kodagu district it is raining heavily. DDPI has all schools holiday declared in Kodagu district.

Kodagu district DDPI Vedamurthy has announced a holiday for the schools as per the direction of the District Collector in the wake of the announcement of red alert till 8.30 am tomorrow. The shear zone that has been critical in bringing heavy rains over South India all of last week will continue to do so for the next few days, further aided by a new low-pressure area that is brewing over the Bay of Bengal, according to the India Meteorological Department (IMD).

As a result, Karnataka will see fairly widespread to widespread rains with thunderstorms and lightning from Thursday to Monday (August 4-8). Heavy rains (64.5 mm-115.5 mm) may also lash isolated parts of the state during this five-day period. Additionally, very heavy rainfall (115.5 mm-204 mm) may also be observed in some parts of coastal and south interior Karnataka heavy rain from Thursday to Saturday (August 4-6) and north interior Karnataka on Friday (August 5).

Chances of torrential extremely heavy rains (204 mm) may also leave some areas of coastal as well as south interior Karnataka reeling on Friday. In view of these predictions, the IMD has put coastal and south interior Karnataka on an orange alert (meaning ‘be prepared’) from Thursday to Saturday (August 4-6), although an upgrade to a red warning remains a strong possibility, especially for Friday.