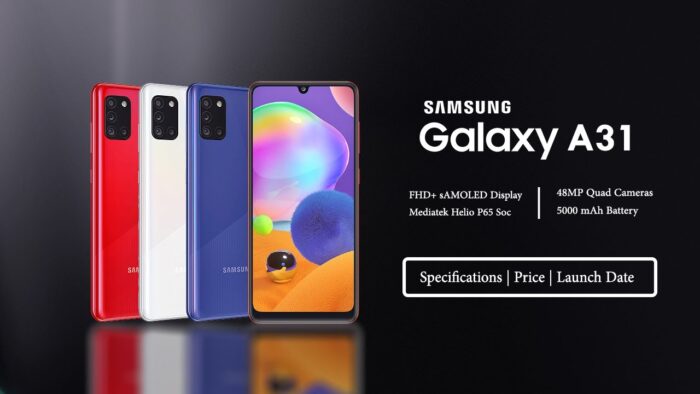 Bengaluru: Samsung will be launching its new Galaxy A31 in India in today. The South Korean company listed the smartphone on its official website last week, and even the Flipkart listing was up. Samsung first unveiled the Galaxy A31 globally in March. It flaunts a 6.4-inch full-HD+ AMOLED display with a waterdrop-style notch.

The handset was introduced in two configurations – 4GB RAM and 64GB storage, and in 6GB+128GB variant. But it is expected that Samsung might launch the phone in one variant in India with 6GB RAM. The price is said to remain close to Rs 23,000.

As we already know, Samsung’s A series of devices sell through both online and offline platforms. So it is likely the Galaxy 31 will also be made available across retail channels. The company will live stream the launch event on its official website at 2PM.

Samsung Galaxy A31: Specifications and features

The full specifications of the Samsung Galaxy A31 was noted on the global website in March. In India, we expect it to come with same configuration. The phone will pack a 6.4-inch FHD+ Super AMOLED Infinity-U Display. Samsung does not mention which processor it is using, but according to leaks it sports a MediaTek Helio P65 SoC under the hood. It has options for 4GB / 6GB RAM with 64GB / 128GB Internal storage, but in India, we might just get the high-end model. The handset will support MicroSD Slot up to 512GB.

The device features a large 5,000mAh battery with 15W charging support as seen on the smartphone’s predecessor. In terms of cameras it features a quad-camera setup on the back. The primary camera on this setup is a 48-megapixel one with f/2.0 aperture. There is also an ultra-wide camera with an 8-megapixel sensor and f/2.2 aperture, a depth sensor of 5-megapixels with aperture of f/2.4, and finally a macro lens with 5-megapixel sensor and f/2.4 aperture.