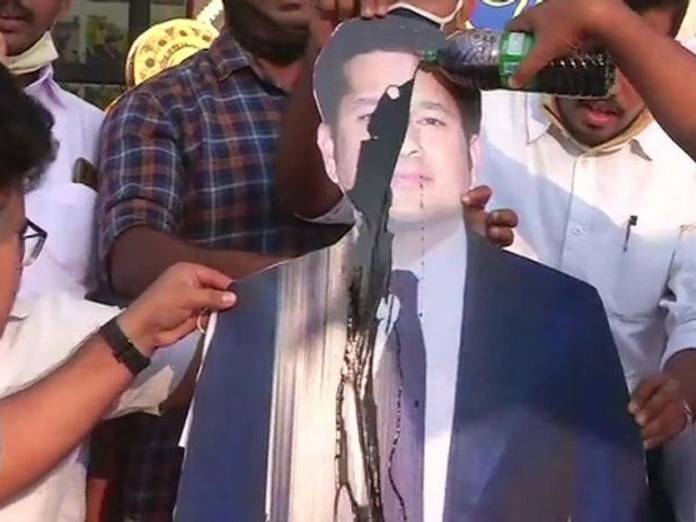 Kerala: A day after his tweet on international personalities who tweeted on farmers protest, the members of Indian Youth Congress on Friday poured black oil on a cut-out of Sachin Tendulkar in Kochi, Kerala.

Sachin Tendulkar and Ravi Shastri joined Bollywood superstars Akshay Kumar, Ajay Devgn and producer-director Karan Johar to support Centre’s call on standing against “propaganda” against the Indian government and its policies after international personalities like Rihanna and Greta Thunberg extended their support towards farmer’s protest.

“India’s sovereignty cannot be compromised. External forces can be spectators but not participants. Indians know India and should decide for India. Let’s remain united as a nation. #IndiaTogether #IndiaAgainstPropaganda,” tweeted Sachin.

“Agriculture is a very important part of the machinery of the Indian economic system. Farmers are the backbone of any country’s ecosystem. This is an internal matter which I’m sure will be resolved through dialogue. Jai Hind!  #IndiaStandsTogether #IndiaAgainstPropoganda,” tweeted Shastri.

Bollywood actors and former cricketers reacted after Ministry of External Affairs (MEA) released a statement which said that notable personalities should refrain from reacting on this issue and rather get “proper understanding of the issues”. “Before rushing to comment on such matters, we would urge that the facts be ascertained, and a proper understanding of the issues at hand be undertaken.

The temptation of sensationalist social media hashtags and comments, especially when resorted to by celebrities and others, is neither accurate nor responsible,” said MEA in its statement on Wednesday.