News » SPORTS » Sachin and I Never Abused Each Other: Shoaib Akhtar

Sachin and I Never Abused Each Other: Shoaib Akhtar 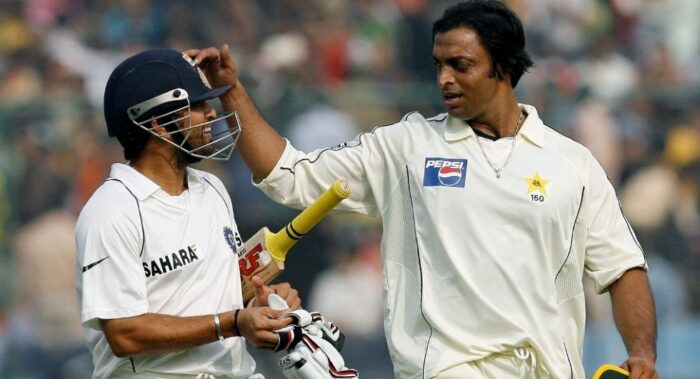 Bengaluru: Former Pakistan speedster Shoaib Akhtar jogged down memory lane and revealed how he tried to get the better of the legendary Sachin Tendulkar during the titanic contest between the two teams in Faisalabad in 2006.

The match ended in a draw following a run-fest with a combined total of six batsmen going past the 100-run mark. Tendulkar, however, wasn’t one of them as he was dismissed for just 14 in the first innings by Akhtar. “People used to say that Sachin and I used to compete against each other, but we never abused each other. I used to respect him as a great batsman and I used to look at him as a great competitor,” Akhtar said during a conversation with Sanjay Manjrekar for ESPNCricinfo.

“But I used to work him out. I used to know where Sachin was injured. In Faisalabad Test, I knew he had an elbow injury and I knew he couldn’t hook or pull the ball, so I kept bowling bouncers at him.” Earlier, talking about the same series, former Pakistan pacer Mohammad Asif claimed that Tendulkar was put under immense pressure by Akhtar in the third Test in Karachi and that helped them win the match in comprehensive fashion.

When we started bowling, Shoaib Akhtar bowled at express pace in that match. I was standing at square leg near the umpire and I myself saw that Tendulkar closed his eyes while facing one or two bouncers bowled by Shoaib, Asif said on the Pakistani show ‘The Burgerz’.

The Indians were playing on the back foot and we didn’t allow them to score even 240 in the first innings. We snatched victory from the jaws of defeat, he added.

Expert says Don’t plan a baby till coronavirus is contained