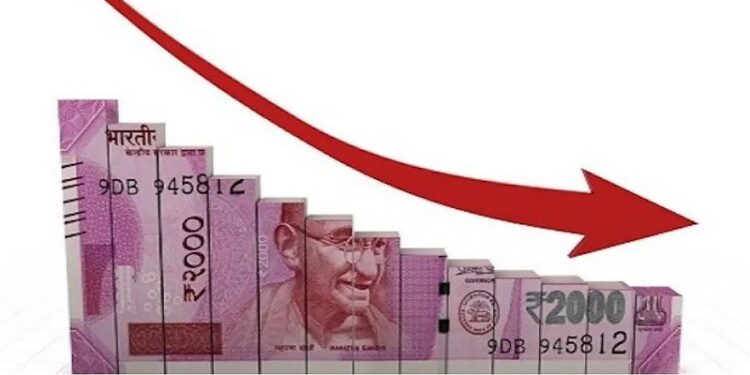 The Indian rupee crossed the crucial 80 mark against the US dollar in early trade on Monday to hit an all-time low of 80.11. The Indian rupee traded at 80.020 at 10.43 am on Monday, which had touched 79.87 against the US dollar on Friday. The fact that the US dollar is the reserve currency of almost all countries is detrimental to other currencies, especially during times of sharp volatility in financial markets as it weakens peer currencies. Rupee hits record low Rupee crossed 80 again against US dollar

In mid-July, the rupee was below 80. “The fight against inflation is expected to continue in the future. Also the rate hike is expected to put pressure on the rupee and other emerging market currencies,” said Santosh Meena, head of research at Swastika Investmart. Rupee hits record low Rupee crossed 80 again against US dollar

Speaking at a central banking conference in Jackson Hole, Wyoming, Federal Reserve Chairman Jerome Powell said the US economy needs tighter monetary policy before inflation gets under control. The main focus of the Federal Open Market Committee (FOMC) is now to bring inflation to the 2 percent target.

The US Federal Open Market Committee raised its key policy interest rate by 75 basis points to 2.25-2.50 percent in late July after four decades of high inflation. Raising interest rates generally cools demand in the economy, thereby putting a brake on the rate of inflation.

Meanwhile, Indian stocks fell sharply this morning. Sensex and Nifty are currently trading 1.5 per cent lower from Friday’s close, recovering some losses in early trade. Domestic gold traded weaker on Monday, pressured by a stronger US dollar and the hawkish US Fed’s monetary policy stance.