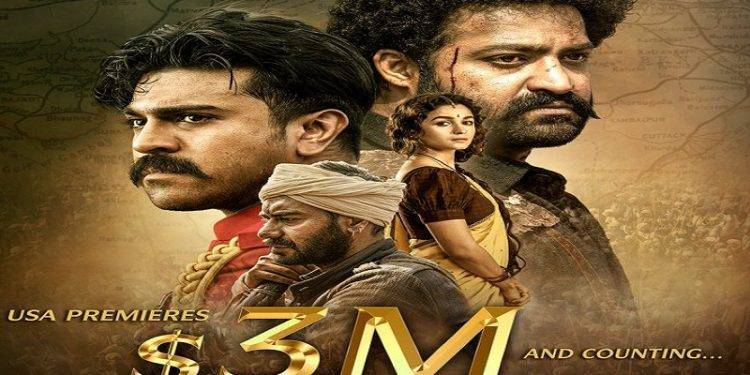 RRR Released: The film that the entire nation, from the north to the south, has eagerly been waiting for years is finally in theatres now. RRR finally Released, Film collects Rs 22 crore from US premieres. RRR has reportedly already collected $3 million (Rs 22 crore) from their US premieres. RRR releases today, March 25, bringing an end to the wait that feels so long.

Starring two powerhouse performers- Ram Charan and Jr. NTR in the lead, the main USP of the film is the fact that it has been directed by none other than SS Rajamouli, the man who gave us Baahubali. Needless to say, the expectations are sky-high, and the grand visuals of the trailer just added to it.

In order to appeal to the Hindi masses, the filmmaker has roped in two Bollywood A-listers for the magnum opus. Ajay Devgn and Alia Bhatt, despite having cameo appearances, will play pivotal roles in RRR. This is one of the biggest releases of recent times- with a budget of over Rs. 400 crores.

lead stars- Ram Charan and Jr. NTR. The two are superstars of the Telugu industry and have a dedicated fan base. In fact, they are brilliant actors who have the ability to connect with the masses. For RRR, they have not just dedicated their time and committed themselves to the film for four years.

But have also undergone a massive physical transformation which was evident in their character promos as well as the trailer. They look impeccable, as did their steps when they danced to ‘Naatu Naatu’ song from the film. It is a film on their friendship, and the camaraderie that they share off-screen makes us even more hopeful that they will share crackling chemistry on the big screen as well.

Also, the fact that the two superstars thought it alright to invest four years of their career, and totally submit to the vision of the director also speaks volume, given they have so far chosen incredible films in their career.

Also Read: KGF Chapter 2, the first song ‘Toofan’ to be released on March 21

The second part, Baahubali 2 The Conclusion (2017) collected a huge Rs. 510.99 crore in Hindi, a record that stands even today. The theatrical trailer has caught the attention and enhanced the hype for the film. Moreover, the presence of Hindi stars like Ajay Devgn and Alia Bhatt have added to the excitement and brand value.