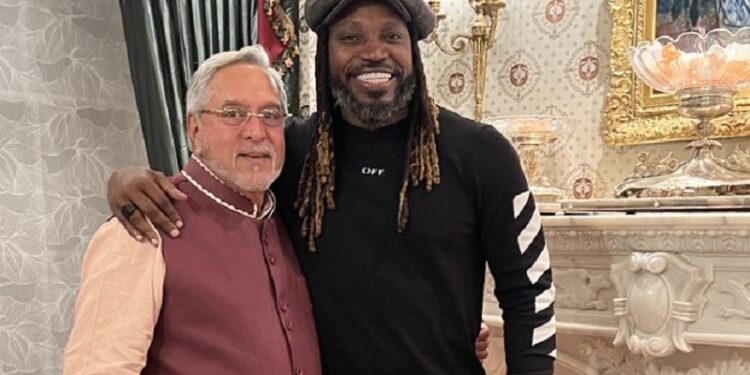 The West Indies opener RCB former player was sensational for RCB over the years in the Indian Premier League, who have inducted him in their Hall of Fame along with former South Africa batter AB de Villiers. Social media couldn’t stay calm when Mallya met with his former protégé Gayle and posted a picture on his Twitter handle.

“Great to catch up with my good friend Christopher Henry Gayle @henrygayle, the Universe Boss. Super friendship since I recruited him for RCB. Best acquisition of a player ever,” Mallya wrote on Twitter. Gayle joined RCB in 2011 and played for the franchise till 2017.

He dominated the league during his stay at the RCB and smashed 3420 runs in 91 games at an average of 43.29 and strike rate of 154.40, including 21 fifties and 5 centuries. Also, he smashed sensational 175 not out while playing for RCB, which is the highest individual score in the history of the tournament.

The ‘Universe Boss’ had recently also met another former team owner – Preity Zinta – in the United States. Mallya, chairman of the now closed Kingfisher Airlines, who was ordered to be extradited by the British judiciary in 2019, is yet to be sent to India.

Mallya is wanted in India to face fraud and money laundering charges and remains on bail in the UK while a “confidential” legal process is completed. Even though his extradition to India was ordered by the UK government in February 2019, Mallya opted for various legal avenues to contest the order in British courts. He is reportedly relying on an application seeking political asylum in the UK.

Here are a few more reactions from fans

Gold rates down today: check latest rates in your city

Gold rates down today: check latest rates in your city