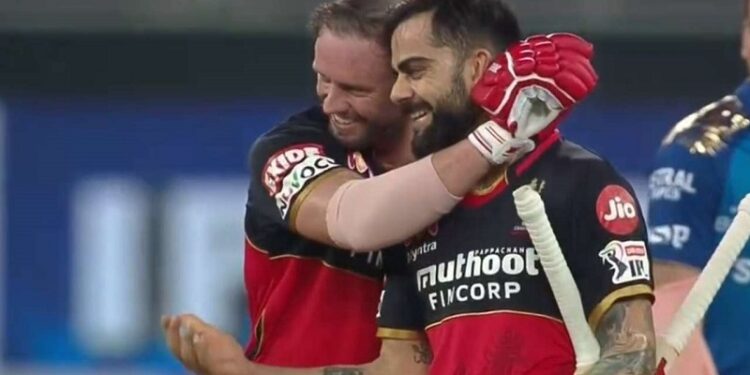 The Royal Challengers Bangalore (RCB) trying to enter playoff in IPL 2022. RCB can still qualify for the IPL 2022 playoffs. In between big development RCB former captain Virat Kohli hints AB de Villiers will enter RCB. They are currently placed fourth in the IPL 2022 points table with seven wins and five lose from 12 matches.

RCB former captain Virat Kohli is hopeful that his friend and Mr 360 AB de Villiers will be back at the Royal Challengers Bangalore in a new role next year. AB de Villiers had been a big part of the RCB family before he retired from all forms of cricket last year.

”I miss AB de Villiers a lot. I talk to him regularly. He was in the US recently with his family watching golf… He is keenly observing RCB and hopefully, he will be here next year in some capacity,” Kohli said during a light-hearted chat posted on RCB’s Twitter handle.

Interestingly, after realizing the gravity of his statement, RCB former captain Kohli asked with a chuckle: “Did I spill the beans?” Kohli is enduring one of the worst phases of his career, having scored 216 runs in 12 matches in the IPL with just one-fifty. He has also been dismissed for three golden ducks this season.

”It has never happened to me ever in my career I think, so I just smiled. I felt like I have seen everything that the game has to show,” RCB former captain Kohli said. His poor form has raised concerns with Ian Bishop pointing out Kohli’s inability to score fluently in the IPL this season. The former West Indies pacer also said that it was a matter of concern that he is getting out to different types of bowlers.

Also Read: Power Cut in Bengaluru: Power supply to be affected in these areas for next 3 day

Also Read: CSK captain out from IPL 2022 remaining matches due to Injury