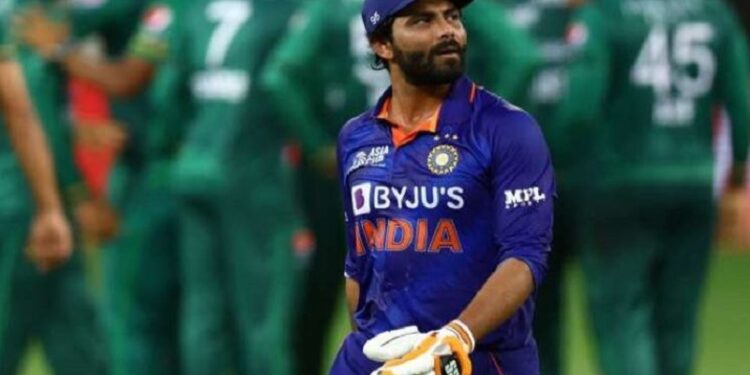 The ICC Men’s T20 World Cup 2022 warm-up matches will be held in Melbourne and Brisbane for all 16 teams. The First Round teams will play their warm-up fixtures between October 10 and 13 with matches to be divided between the Melbourne Cricket Ground and Junction Oval. Ravindra Jadeja out from T20 world cup, BCCI angry on all-rounder.

The Board of Control for Cricket in India (BCCI) is angry with Ravindra Jadeja and it is Jadeja’s negligence that has caused the board’s displeasure. In fact, Jadeja had to leave the team halfway through the Asia Cup 2022 due to injury. Due to this, India lost the rest of the matches and had to be eliminated from the Asia Cup. Now, according to a report in Times of India, Jadeja is reportedly out of the ICC Men’s T20 World Cup 2022 due to his own negligence.

In fact recently Jadeja underwent a knee surgery. Therefore, the BCCI medical team advised Jadeja to do some activities in Dubai to recover quickly. But Jadeja ignored all this and got injured again. According to a Times of India report, at the hotel where Team India was staying in Dubai, Jadeja was instructed to do some water-based training activities. But Jadeja ignored the doctor’s advice and slipped while playing ski board in the water and injured his knee.

After all, this ski board activity was not in the advice given by the doctor. So the BCCI is reportedly angry with Jadeja for not following the guidelines. After getting out of the Asia Cup, Jadeja returned to Mumbai. There he underwent surgery under BCCI supervision. But after Jadeja’s injury, the question has now arisen whether the ski board activity was necessary. Many are questioning whether it was necessary for the leading player of Team India to do adventure activities before an important tournament like the World Cup.

According to media reports, some BCCI officials are also upset with Jadeja. However, till now there is no official information about how Jadeja got injured. Sources also say that it is surprising that Rahul Dravid has not lost his cool over Jadeja’s injury. Amidst all this, reports are doing the rounds that Team India will go to Australia for the World Cup without Jadeja.