by News Next Desk
in TEMPLE 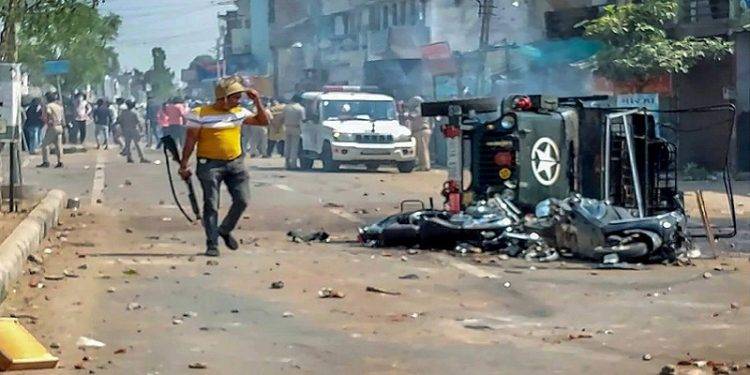 Ram Navami stones hurled: Stones were hurled at a Ram Navami procession in Madhya Pradesh’s Khargone city on Sunday triggering incidents of arson wherein some vehicles were set on fire, prompting authorities to clamp curfew in three areas and section 144 of CrPC in the entire city.

Police fired tear gas shells to control the situation. Khargone superintendent of police Sidharth Choudhary and two police personnel were injured in the stone-pelting along with some people. Khargone District Collector Anugrah P said section 144 of CrPC (banning assembly of four or more people) has been imposed in the entire city.

“Curfew has been clamped in three areas including Talab Chowk and Tavdi in the city,” he said, adding that incidents of minor arson occurred following the pelting of stones. When the Ram Navami procession started from the Talab Chowk area near the district headquarters stones were pelted at the gathering, prompting the police to fire tear gas shells to control the situation.

Some policemen and people were injured, said Khargone Additional Collector Sumersingh Mujalde. The procession was supposed to take a round of Khargone city but it was abandoned midway after the violence, the collector added. The Khargone SP sustained injury to his foot and admitted to a private hospital.

Free travel to Ayodhya for senior citizens from next week. Check date, registrations

Sabarimala temple to reopen on 16 Oct; new head priest to be selected next day: Check details