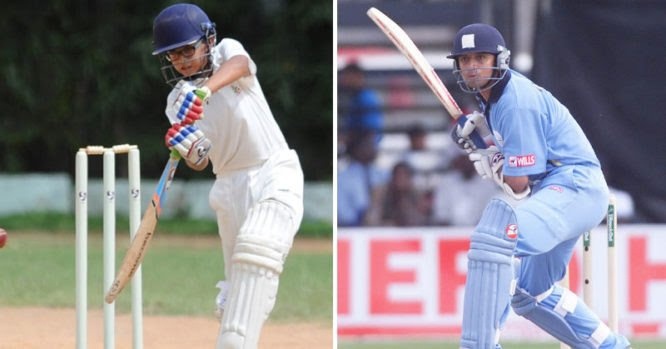 Samit Dravid, 14, scored 201 for Vice-President’s XI against Dharwad Zone in an Under-14 between zonal competition in Kolkata.

Samit Dravid, child of previous India cricketer and current National Cricket Academy (NCA) head Rahul Dravid scored a splendid twofold century in a U-14 BTR Shield coordinate between his group Mallya Aditi International School and Sri Kumaran. He has been appreciating a splendid run of structure as this was his second twofold ton in two months. Samit scored 204 with the assistance of 33 limits to help Mallya Aditi International School post a sum of 377/3. Accordingly, Sri Kumaran was packaged out for 110 with Samit accepting two wickets as his group won by 267 runs.

Samit broke a twofold century in an Under-14 state-level match in December a year ago. Samit, scored 201 for Vice-President’s XI against Dharwad Zone in an Under-14 between zonal competition in Kolkata. His 256-ball innings was bound with 22 fours. The match finished in an attract as Samit added to his first-innings count by scoring an unbeaten 94 in the subsequent paper. He additionally took three wickets.

Not long ago, Rahul Dravid hailed the offices at the arena set up by Salem Cricket Foundation and commended the Tamil Nadu Cricket Association (TNCA) for creating offices and framework. “It is phenomenal that offices and framework are being created by the TNCA and the Tamil Nadu government. I genuinely accept that the up and coming age of cricketers, the up and coming age of saints and ability in the nation is going to originate from littler towns and urban areas and such offices would assist them with accomplishing their objective,” the amazing cricketer included.

Dravid likewise adulated Tamil Nadu left-arm paceman T Natarajan, who hails from Salem and said he would be a good example for another age of players.