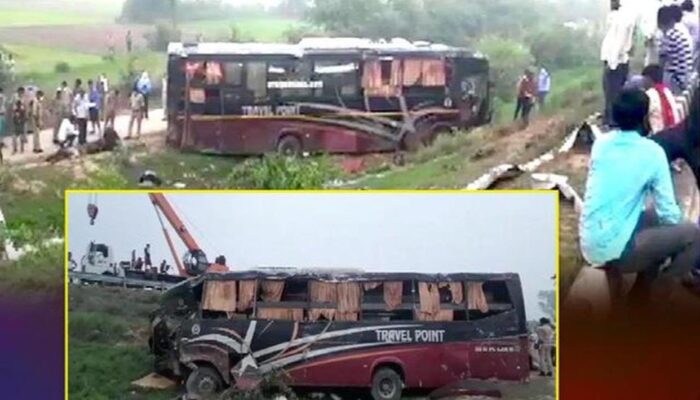 Lucknow: Six people were killed and at least 20 others injured when the private bus they were travelling in fell off the Lucknow-Agra Expressway after hitting another vehicle in Uttar Pradesh’s Kannauj district on Sunday, police said.

The accident occurred at around 5:15am 122 kilometres from the state capital of Lucknow. The bus, according to police, had started from Darbhanga in Bihar and was going to Delhi.

A private bus with around 40 passengers toppled down the highway after colliding with a stranded SUV. Five passengers were killed on the spot while another died minutes after reaching the hospital, Amrendra PD Singh, Kannauj’s superintendent of police (SP), said.

“Around 20 other passengers have also sustained injuries. They have been admitted to hospital,” Singh added. Condition of some of the injured is said to be critical. It appears that the bus driver failed to spot the SUV in time that led to the collision and then failed to control the bus which toppled down, Singh said.

A police team reached the spot within a few minutes and called an ambulance that carried the injured to hospital. They were trying to identify the dead and the injured by the time this report was filed.

Uttar Pradesh chief minister Yogi Adityanath expressed his condolences over the death of the passengers and directed officials to ensure proper treatment of those injured.