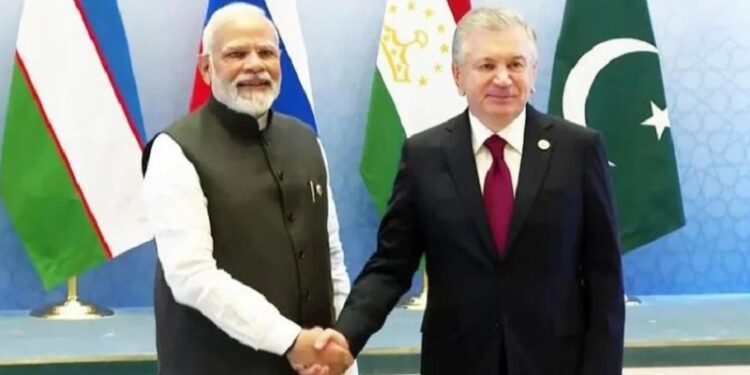 “President Shavkat Mirziyoyev of Uzbekistan welcomed PM @narendramodi  to the Congress Centre in Samarkand for the 22nd SCO Summit. India has been working closely with Uzbekistan towards the success of their Chairship (sic),” Arindam Bagchi, the official spokesperson for the Ministry of External Affairs, wrote on Twitter. He further stated that PM Modi joined the dignitaries of SCO Member States to hold discussions over a wide range of topics. These include topical, regional and global issues, including regional peace and security, trade and connectivity as well as culture and tourism. PM Narendra Modi Welcomed By Uzbekistan President as attending 22nd SCO summit.

Meanwhile, PM Modi is also expected to hold bilateral meetings with Uzbekistan, Iran and Russia on the sidelines of the summit. At the conclusion of the Samarkand Summit, India will also take over the rotating annual chairmanship of the SCO, which is now held by Uzbekistan. Earlier on Thursday, PM Modi reached Samarkand where he was received by several high-profile leaders of Uzbekistan including Prime Minister Abdulla Aripov.

It is pertinent to mention here that this is the first in-person SCO Summit since the coronavirus pandemic hit the world. The SCO currently comprises eight Member states including Uzbekistan, India, China, Kazakhstan, Kyrgyzstan, Russia, Pakistan, and Tajikistan. Besides, it also has four Observer States – Afghanistan, Belarus, Iran, and Mongolia – as well as six Dialogue Partners which include Armenia, Azerbaijan, Cambodia, Nepal, Sri Lanka and Turkey. According to reports, the SCO is one of the largest multilateral organisations with almost 30% of the global GDP and 40% of the world’s population.