by News Next Desk
in LATEST NEWS, POLITICS, STATE 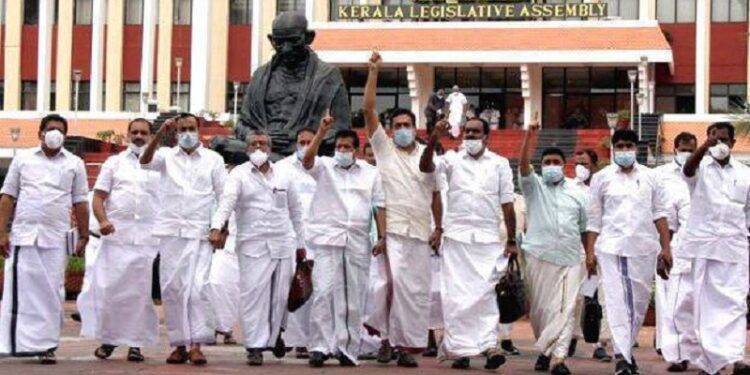 Kerala: Leader of Opposition V D Satheesan on Friday again demanded the resignation of Kerala General Education Minister V Sivankutty over a case related to the infamous ruckus incident in the Assembly in 2015. Satheesan, during the Assembly proceedings, said the ruckus had occurred for the reason that there was an FIR against then state Finance Minister K M Mani.

He told Pinarayi Vijayan that he was the chief minister of the party whose members had then created a ruckus demanding Mani”s resignation. The Congress leader said the opposition was sticking to its demand for Sivankutty”s resignation and are protesting against him continuing as a minister as there is a criminal case against him in connection with the ruckus incident.

As the Chief Minister did not respond to his demands and the question and answer session continued, opposition leaders started chanting slogans for resignation of Sivankutty. They also boycotted the proceedings. Vijayan, on Thursday, had ruled out resignation of the state General Education Minister.

Following the Chief Minister”s stand, the opposition had boycotted the House proceedings. The Congress-led UDF opposition raised the six-years- old incident in the state Assembly on Thursday a day after the Supreme Court dismissed a government plea seeking withdrawal of a criminal case against LDF MLAs, including Sivankutty, in connection with the ruckus.

They had said it was ”unjust” for Sivankutty to continue as a minister even after the apex court had made it clear that the Marxist leader should face judicial trial and the Chief Minister should be ready to either seek his resignation or remove him from the position on moral grounds.

However, Vijayan, had categorically rejected their demand saying that the court had not found any particular individual guilty or name anyone and so the issue of resignation did not come up. Justifying the government act of approaching various courts including the apex court with a plea seeking withdrawal of the case involving the Left front MLAs, he had said taking criminal action against a legislator in the name of protest inside the Assembly was something generally unheard of in the country.

He had also said that the then Assembly speaker had already taken action against the accused MLAs and suspended them from the House in this regard, he said two punishments for a crime is against the basic tenets of our legal concept. The decision of the Supreme Court on the ruckus in the Kerala Assembly in 2015 has come as a jolt to the two-month- old second Pinarayi Vijayan-led government in the State.

Covid third wave fear starts in India, cases go up for 3rd day, 2 states are in danger with 60% active cases

Covid third wave fear starts in India, cases go up for 3rd day, 2 states are in danger with 60% active cases