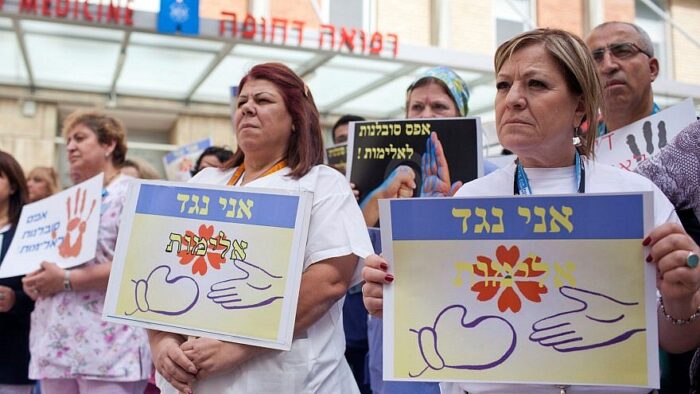 Israel: Nurses across the country went on strike at 7 a.m. Monday over staff shortages that they say have made it impossible to continue their work, after last-ditch talks with the treasury seeking to prevent the strike failed.

Union heads and the director-general of the Finance Ministry, Keren Terner Eyal, did not come to any agreement during meetings on Sunday and overnight. It was not immediately clear whether the strike would only last for one day or whether it was open-ended. The Health Ministry said Sunday that there were 813 nurses in quarantine, with the Ynet news site reporting that there had been no additional staffing added even as hospitals open more coronavirus wards.

“We explained the situation to the director general of the Finance Ministry. It should be understood that the shortage of nurses did not start with the coronavirus [pandemic]. The responsibility is the treasury’s and they had time to resolve this. We are on strike tomorrow,” National Nurses Union head Ilana Cohen told the Kan public broadcaster Sunday. Opposition Chief Yair Lapid tweeted Monday morning that the nurses, like the social workers, who are also striking, “have understood there is no government in Israel.”

Lapid charged that the “detached” government was “occupied with itself” while “there is nobody to address the problems. Everyone standing on the front lines of Israeli society has been abandoned.”

Which services will be operating?

Medical interns in hospitals announced Sunday evening that they would strike for two hours in solidarity with the nurses, between 10 a.m. and 12 p.m. The strike was expected to create bottlenecks and longer waiting times than usual in emergency rooms.

Nursing staff will not be working Monday in all health clinics, institutions and daycare centers, according to Channel 12. Surgery rooms will operate with reduced staff, like during weekends, meaning that non-urgent operations planned for the afternoon will be canceled.

All hospital wards housing patients will similarly operate on weekend protocol with reduced staff, with the exception of the wards housing coronavirus patients. COVID-19 tests will also continue with full staff. Each hospital will have a committee to decide on specific cases on an individual basis.

Nurses will also strike in all health maintenance organizations (HMO), with service given in reduced form like during weekends. The services that will be given are home treatments, insulin therapy, fertility treatments, oncology treatments, gastroenterology institutes and daycare centers.

Family health centers will only give service in one station per city to deal with cases of high-risk pregnancy and prematurely born babies. Epidemiological centers will have skeletal staff for urgent cases of rabies and meningitis. Coronavirus response centers will be fully staffed and contact tracing investigations will be carried out as usual. Vaccine labs for travelers abroad won’t operate, and medical examinations won’t be held. Reception of the public will not be possible throughout the work hours. Blood tests and sampling will only be conducted in health clinics.

The National Nurses Union initially declared a labor dispute last month, stating that nurses’ heavy workload detracted from their ability to provide proper care to patients. Last week Cohen, the union head, wrote to Finance Minister Israel Katz, saying that “the nurses are collapsing.” “It is no longer possible [to continue]. The system is down, period,” she declared. “What we need at the moment is manpower.” She further charged that patients and nurses had been “abandoned” and that the health system was “drying up.”

She complained that hospitals had purchased ventilators without providing additional training, had not increased staffing numbers to a level appropriate to the new circumstances, “and opened coronavirus wards without adding personnel.”

There was a shortfall of hundreds or as much as a thousand staffers, Sheba Medical Center Deputy Director Prof. Arnon Afek told Ynet last week. “There is a great shortage in the number of nurses compared to the number of beds we operate within hospitals.”

Last July, nurses across Israel went on strike after negotiations between the National Nurses Union and the Health Ministry broke down. The nurses were protesting what they said were poor working conditions, heavy caseloads and low standards of care.