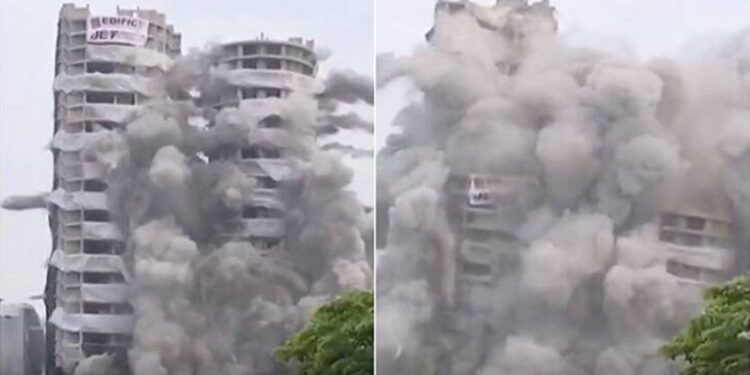 The biggest residential demolition in the country took place in Uttar Pradesh’s Noida at 2.30 pm on Sunday as Apex and Ceyane towers which are taller than Qutub Minar was brought down with more than 3,700 kg of explosives. Noida Twin Towers demolished in 9 seconds.

Also known as the Noida Twin Towers demolished in Sector 93, the skyscraper was built by developer Supertech Ltd and was steeped in controversy for years until last year when the Supreme Court ordered the illegal construction to be razed down. According to the apex court, the New Okhla Industrial Development Authority (NOIDA) and the builder colluded to build the towers illegally and without the consent of flat owners, as required by the Uttar Pradesh Apartment Act.

To demolish the buildings, 9,640 holes were drilled in 2,650 columns from the top to the bottom of the buildings. Moreover, every alternate floor where the drilling was done, was wrapped with geotextile fibre to prevent chunks from flying out during the blast. The two towers house 915 flats and shops.

Forecasts from the India Meteorological Department (IMD) suggest that fairly widespread to widespread light or moderate rainfall with isolated heavy showers (64.5 mm-115.5 mm), thunderstorms and lightning are very likely over Tamil Nadu until next Wednesday, August 31. . IMD issued heavy rainfall alert in these states for next 5 days.

IMD issued heavy rainfall alert in Tamil Nadu districts are in for a fresh spell of precipitation starting today. The rains are expected to last for the next five days at least, and all major cities of the state will remain on alert for the durationAnd during this five-day period, the entire state will remain on yellow watch so as to urge locals to ‘be updated’ about the inclement weather.

Asia Cup 2022: Pak team's strength is their weakness: this is a plus point for team India