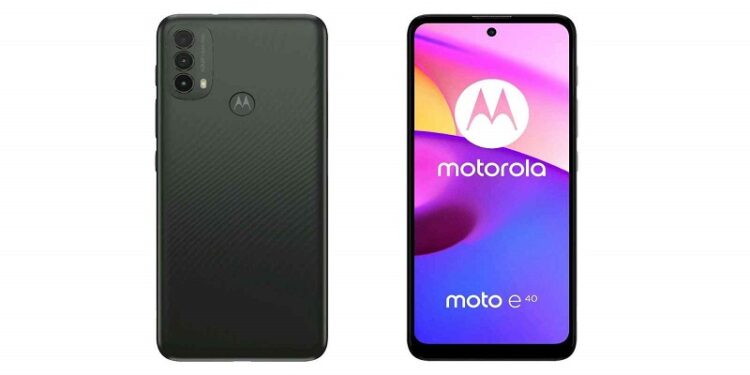 Motorola has launched its latest Moto E40 in Europe. The same smartphone will arrive in India on October 12, as per a dedicated Moto E40 page published by Flipkart. The Moto E40 offers a 48MP triple rear camera setup, a 5,000mAh battery, and a 6.5-inch display with support for a high refresh rate.

As per the Flipkart listing, the Moto E40 will sport a 6.5-inch, 90Hz HD+ display with 400 nits of brightness. There is a punch hole at the top of the display to accommodate the selfie camera. The upcoming smartphone would be powered by the Unisoc T700 octa-core processor clocked at 1.8GHz.

The chipset has been coupled with 4GB of RAM and 64GB of storage. The storage can be further expanded up to 1TB via a microSD card. The Moto E40 is powered by a 5,000 mAh battery, which Motorola claims can last for 76 hours of music streaming, 14 hours of video playback and 10 hours of web browsing. The device runs near stock Android 11 out of the box.

The rear camera set-up on the Moto E40 comprises of a 48MP sensor with Quad Pixel Technology to bin four pixels in one, resulting in high definition images with 12MP resolution. The other two sensors include a macro vision camera and a depth camera.

Moto E40 gets a rear-mounted fingerprint reader and a dedicated Google Assistant key, similar to the one on Moto G30 smartphone. The device has been rated IP52 for water resistance. It will be launched in Pink Clay and Carbon Gray colour finishes.

The Moto E40 has been priced at EUR 149 (around Rs 13,000). The price for the Indian market will be revealed once the device is launched on Tuesday. It is very likely to be an affordable offering, considering the European price.