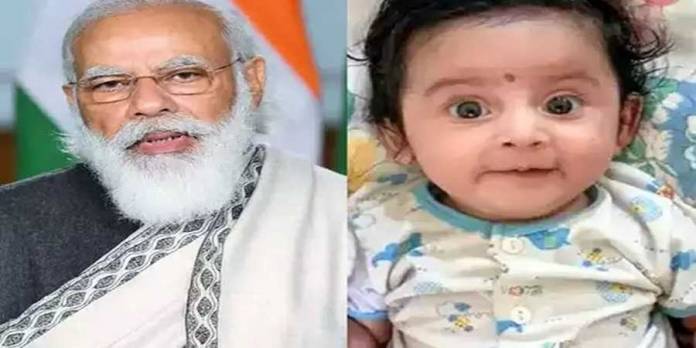 Mumbai: The Union government was on Tuesday hailed by the social media users for waiving import duty and GST of Rs 6 crore on medicines for a five-month-old girl suffering from a rare medical condition.

The news was shared by Bharatiya Janata Party (BJP) leader Devendra Fadnavis on Twitter. Five-month-old Teera Kamat suffers from Spinal Muscular Atrophy (SMA) Type 1 in which a complete breakdown of nerve cells leads to zero control over muscle movement. She is undergoing treatment in a suburban hospital.

Teera’s parent generated Rs 16 crore through crowd-funding for Teera’s treatment who can be cured by gene replacement therapy. The therapy includes the medicine named Zolgensma which needs to be imported from the USA. The medicines would cost the Kamats Rs 16 crore.

Recently, the leader of the Opposition and BJP MLA Devendra Fadnavis wrote to PM Modi and Finance Minister Nirmala Sitaraman requesting them to exempt all applicable taxes on the import of medicines. “The parent of Teera Kamat have raised the Rs 16 crore through crowdfunding. Therefore, this should be made a special case to save the life of this child,” Fadnavis said in his letter.

Prime Minister responded to Fadnavis’ letter saying that Rs 6 crore of customs duty will be exempted for Teera. Mumbai residents Priyanka and Mihir Kamat gave birth to Teera on August 14, 2020. By the time she was born, she was just like any other child. After two weeks, she started getting restless while being breastfed and at one time she stopped breathing.

The doctors told them that Teera was suffering from Spinal Muscular Astrophys (SMA). It was found that a person with this disease does not have the protein-producing genes. The ailment slows down the process of nerve and muscle strengthening too. As a result, the patients find it hard to swallowing food, breathe and move.

Research is being done abroad on the rare disease and some drugs have recently become available in the United States. However, they are very expensive and the treatment was beyond the reach of Teera’s parents. But their effort to save the child opened many hearts to donate and extend their best wishes to Teera.