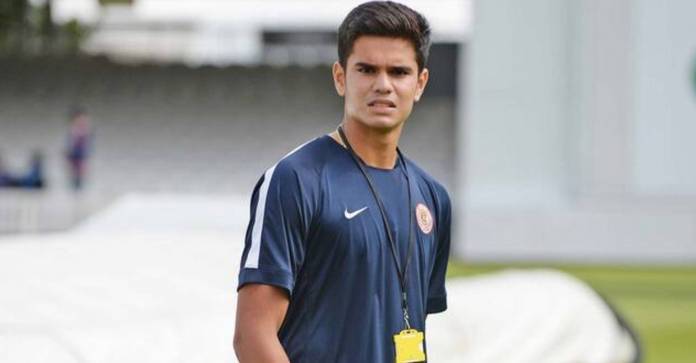 The likes of Chris Morris, Glenn Maxwell, Kyle Jamieson, etc. made the big bucks at the Indian Premier League (IPL) 2021 auction on Thursday but one name that arguably kept fans the most engaged on social media was Arjun Tendulkar. Arjun Tendulkar has been one of the most talked-about young cricketers in India.

Being the son of the legendary Sachin Tendulkar has got a lot of eyes on him. And a lot of pressure also. Unlike his father, Arjun is a left-arm pacer and has been performing well in the domestic circuit. He had put his name in the auction list and it was expected that Mumbai Indians would go for him. And in the end that is exactly what happened as the defending champions picked up Arjun for his base price of 20 lakh.

Mumbai Indians head coach Mahela Jayawardene revealed the reason behind his purchase as he said that the side picked Arjun Tendulkar purely on the basis of his skill sets. Jayawardene said the stint with Mumbai Indians will be a learning process for Arjun. The former Sri Lanka skipper also said the 21-year-old left-arm medium-pacer will learn and evolve his game with time. “We’ve looked at it purely on a skill basis.

I mean, there is going to be a big tag on his head because of Sachin. But, luckily, he’s a bowler, not a batsman. So I think Sachin will be very proud if he could bowl like Arjun,” Jayawardene as saying. “I think it’s going to be a learning process for Arjun. He just started playing for Mumbai, and now the franchise. He will learn the ropes; he will evolve. He’s still young. A very focused young man,” he further said.

“We have to give him time and hopefully not put a lot of pressure on him either. Just let him evolve and work his way up, and that’s what we’re there to help him to do,” Jayawardene added. Arjun was also the Mumbai Indians net bowler during the IPL 2020 and was the last player to be bought in the IPL auction on Thursday. “I have spent a lot of time in the nets, trying to teach him some tricks of the trade, he is a hardworking kid, he is keen on learning, it is an exciting part.

The added pressure of being Sachin Tendulkar’s son will always be on him, it is something he needs to live with, the environment of the team will help him. It will help him become a good cricketer, how many times a youngster gets picked in the auction and everyone is talking about him, he has to prove himself and he has to show everyone he has the goods,” said Mumbai Indians’ Director of Cricket Operations, Zaheer Khan during a virtual press conference.