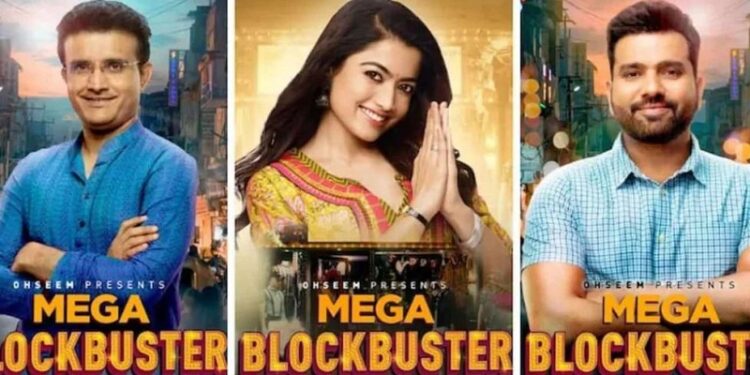 Indian team is currently participating in Asia Cup-2022. The team has performed well in this tournament so far and has made it to Super-4. India defeated arch-rivals Pakistan in their first match and then beat Hong Kong by 40 runs. This time the team captain Rohit Sharma also achieved some milestones. ‘Mega Blockbuster’: Rohit-Ganguly will share the screen with Rashmika Mandanna. See the poster.

Rohit has played 37 T20 matches as a captain, out of which Rohit has managed to win 31 matches. But in the meantime, Rohit has shared important information in his Instagram post which will surprise the fans. ‘Mega Blockbuster’: Rohit-Ganguly will share the screen with Rashmika Mandanna. See the poster.

Team India is preparing for its Super-4 match in Asia Cup-2022. India, Pakistan or Hong Kong can be faced there. But in the meantime, Rohit shared a photo on his Instagram that looks like a movie poster.

In this photo, Rohit is alone and on the photo is written ‘Mega Blockbuster’ and along with it ‘Trailer will be released on 4th’ is written. Rohit shared the photo and captioned it, “I’m a bit nervous. He wrote that this is a kind of debut attempt.

Not only Rohit, Board of Control for Cricket in India (BCCI) president Sourav Ganguly also did the same. Ganguly himself posted a photo of the film’s poster on Instagram. This poster has a lot of similarities with Rohit’s poster. Ganguly captioned the post, enjoying the shoot so much, the new mega blockbuster will release soon.

Not only Rohit, Ganguly, South Indian famous actress Rashmika Mandanna also posted such a poster on her Instagram.

What is the secret?

Both Rohit and Ganguly haven’t hinted at what they are waiting to release in their respective posts. Now the question of what these two are talking about has arisen in everyone’s mind. If you look at the post, both of them are pointing at some picture. Fans have started wondering whether Rohit will be seen on screen with Rashmika in the near future.

Also Read: The second player in the world: Shakib Al Hasan who wrote a special record in T20 cricket

Something can happen on September 4. But before that, the eyes of Team India and its fans are fixed on the result of the match between Hong Kong and Pakistan on Friday. Because the team that wins this match will play the match against India. Therefore, Team India is keeping an eye on this match. So, to see India and Pakistan face off again, Indian fans want Pakistan to win this match.

The second player in the world: Shakib Al Hasan who wrote a special record in T20 cricket