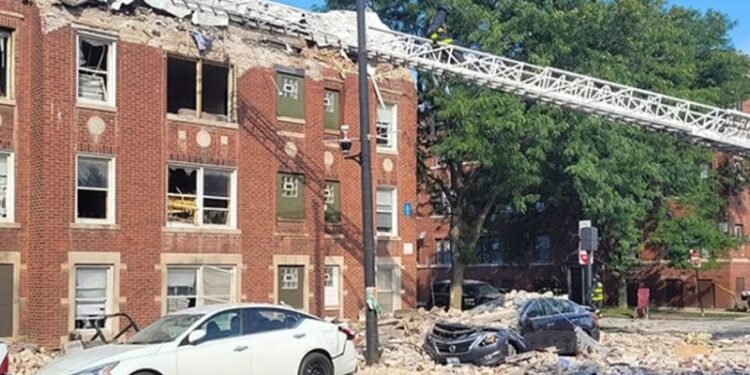 A massive explosion rocked a residential building in Chicago on Tuesday. Officials of the local fire department said that eight people were injured in the blast. The Chicago Fire Department confirmed the explosion at 9:45 a.m. (local time) and tweeted images showing the top floor of a four-story apartment building on the city’s west side completely destroyed by the blast. Massive explosion at Chicago residential building 8 injured.

The explosion occurred near Washington Boulevard and Central Avenue, the department said. Background of the explosion The explosion took place in a four-storey apartment building. This building has 35 units. An investigation is currently underway by the CFD OFI. The Chicago Fire Department said the operation was assisted by ATF and CPD. Massive explosion at Chicago residential building 8 injured.

ABC News reports that three of the injured are in critical condition. Fire officials said people in a building adjacent to the blast site were being evacuated. People in the building were safely evacuated, Furman said. The report said that the fourth floor of the building collapsed.

According to the fire department, two women and a man were injured. Ten ambulances and 135 first responders were called to the scene, he said. This video has gone viral on social media. Huge debris of the building lay on the pavement, streets and several cars.

At least eight people were injured in an explosion at a residential building in Chicago on Tuesday, authorities said.Of those injured, three are in serious to critical condition, the Chicago Fire Department said.The “mass casualty” incident occurred at Central and West End avenues in the city’s South Austin neighborhood around 9 a.m. local time.

“This is a confirmed explosion but source of explosion not known,” the fire department said.Six men and two women were taken to hospitals, officials said. Their ages were not immediately clear. One of the victims was in a building across the street from the explosion, fire officials said.