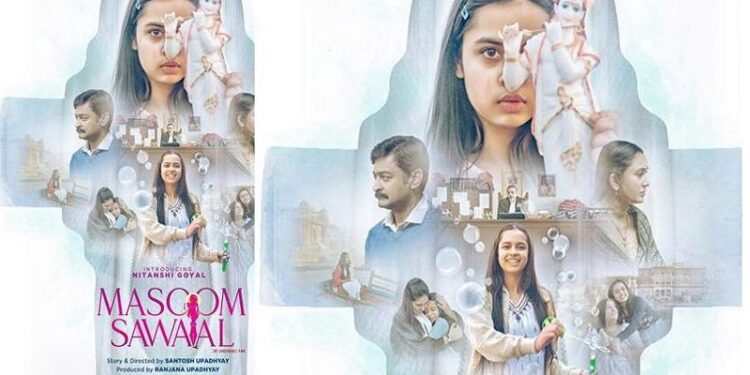 Police have registered a case against director Masoom Sawal along with other team members following complaints that the film’s poster hurts religious sentiments by showing the image of Lord Krishna on a sanitary pad, officials said on Sunday. Masoom Sawal poster: Lord Krishna photo on the sanitary pad.

The Hindi film ‘Masoom Sawal’ has been embroiled in controversies. The producer and director of the film have been accused of hurting religious. According to the police, the FIR has been registered following complaints made by Amit Rathore, president of Hindu Rashtra Navnirman Sena.

Sahibabad Police Officer (CO) Swatantra Singh said that an FIR has been registered under section 295 of the Indian Penal Code (causing damage to or desecrating a place of worship with intent to insult the religion of any class).

The complainant alleged that the filmmaker has published the Lord Krishna photo on the sanitary pads used by women, which is visible on the poster of the film. He said that this act of the producer has hurt the religious sentiments of the followers of ‘Sanatan Dharma’, which could lead to communal riots in Uttar Pradesh and the entire country.

The FIR alleged that the accused filmmaker and his team tried to spread communal hatred in a very well-planned manner in the country. Meanwhile, the complainant told PTI that the office bearers and workers of the organization will protest outside two cinema halls in Sahibabad and Ghaziabad city.

Police have beefed up the security of cinema halls where ‘Innocent Question’ is being shown. The CO said that action will be initiated against the erring persons and if anyone tries to disturb the peace, no one will be spared. He claimed that law and order will be maintained at all costs.