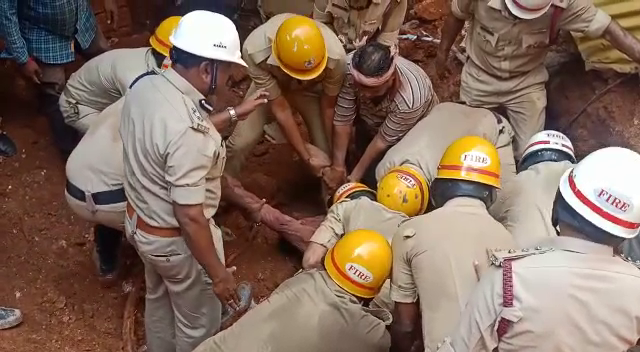 Mangaluru, Feb 28: In a disastrous episode that happened on the evening of Friday, February 28, three workers got stuck under a huge heap of mud and stones, when the compound wall near which they were working collapsed suddenly. Two died and one suffered serious injuries in the mishap. This mishap is reported from bunts hostel in the city.

Bhimesh (25) from Bagalkote, and Masrigul (20), an resident of Bengal, are the expired. Hanikul (23), who endured wounds, was admitted to Yenepoya Hospital. The workers were working close to the compound divider, when it fallen out of nowhere on them. While Bhimesh and Masrigul died after getting buried under the mud, Hanikul, who was working nearby, suffered injuries when a stone fell on his leg.  Fire  work force of Kadri and Padeshwar raced to the spot and all endeavors are being made to save the workers who are stuck underneath the mud.

MLA Vedavyasa Kamath showed up to the spot. Other cops and offcials likewise hurried to the area.Vedavyas Kamath stated, “It is found out that two died and one worker injured seriously. Rescue work is progress. Police and fire power staff are clearing mud and stones which fallen from the side of the structure. I am disheartened by this occurrence and have directed officials to take necessary steps.”

“According to Employment Compensation Act, both head boss and contractual worker need to offer remuneration to the wards. The ward can record case at JMFC court in the event that they neglect to give pay. The pay can be given to the wards dependent on their age,” said work official Wilma Tauro.