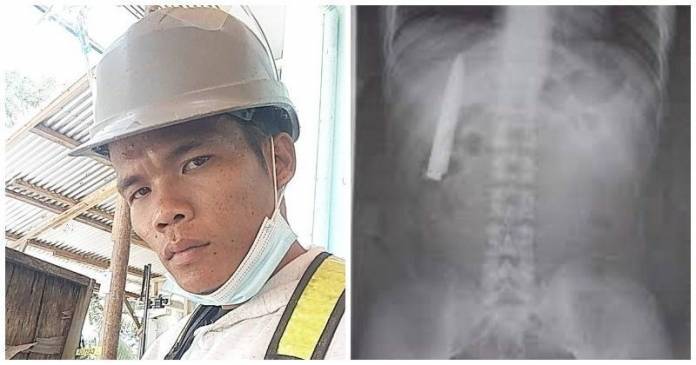 Kent Ryan Tomao, 36, was targeted while heading home from work in Kidapawan City, the Philippines, in January last year. Hospital medics allegedly sewed up his wound and gave him painkillers but left the broken blade lodged next to his rib cage.

Fourteen months later, Kent underwent an X-ray for a pre-employment medical test, which showed the knife was just inches from piercing his lungs. A man in Philippines who was stabbed more than a year ago had no idea that he still had the knife stuck in his chest.

Kent Ryan Tomao, was targeted while on his way back from work in Kidapawan City, in the Philippines, in January last year. Hospital medics, while treating him, allegedly only sewed the wound and gave him painkillers, but left the broken blade lodged next in his chest.

Kent didn’t realise about it until he went for a health check-up for his new job on March 23. The X-ray showed the knife was still lodged in his body next to his rib cage, inches away from piercing his lungs. But now, he has been left furious and is demanding the doctors who missed the four-inch-long blade remove it.

With the knife still inside him, he has been unable to start work as a miner, as his new employers think it would be unsafe for him to work with the knife still in him. “The doctors did not check my wounds properly last year so I believe they are partly at fault about what happened. They should fix this.

He claimed his wounds were stitched up to stop him bleeding at the hospital, and he was then given painkillers and told to go home. “The pain was never bad enough to even go to see a doctor. I just waited for the pain to pass. Now I’m relieved that I know the real problem,” he added.

He, however, has no plans to take any action against the hospital that treated him, but wants the doctors at the facility to rectify the problem as he can’t afford the operation by himself.