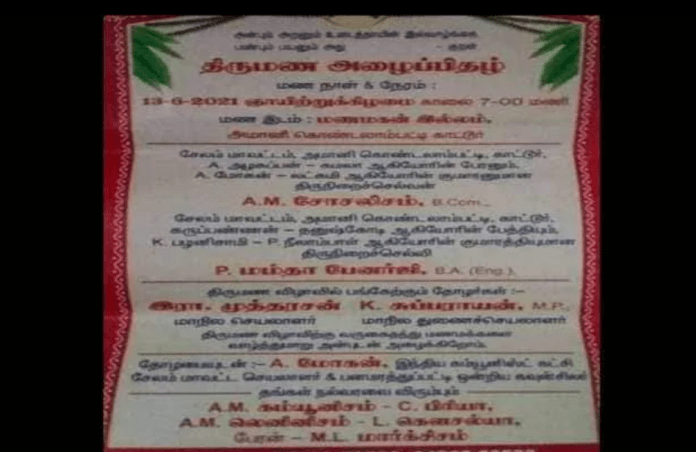 Chennai: Mamta Banerjee will marry Socialism this Sunday in Salem district of Tamil Nadu. The upcoming wedding in Salem has become the talk of the town ever since an invitation card went viral.

It might sound bizarre, but Socialism and Mamta Banerjee are indeed getting married in two days. The invitation was published on Monday and since then the family members had to answer several calls confirming the authenticity of the card.

The groom is the son of Lenin Mohan, aka A Mohan, who is the district secretary of the Communist Party of India (CPI) in Salem. While explaining the unique naming tradition in his family, Mohan told media , “After the Soviet Union was dissolved, people were saying that communism has fallen and the ideology won’t prosper anywhere in the world.

There was a news clip on Doordarshan with regards to this and at that time, my wife gave birth to my elder son. I decided immediately to name him communism as I believed that till the human race exists, communism won’t fall.” Furthermore, Mohan revealed that in Kattur village, where majority of the people follow communism, it is not uncommon to find names such as Russia, Moscow, Czechoslovakia, Romania, Vietnam, Venmani, etc.

The groom’s father added, “Leaders, countries, ideologies people name their children after this. I wanted to name my children after ideology. All three sons are uniformly named.” Since the family was unable to invite people for the wedding due to the Covid-induced restrictions, they chose not to print a physical invite. Instead, they published the card in ‘Jana Sakthi’, the Tamil mouth piece of the CPI.

The marriage is slated to take place on June 13 at the bride’s house in Amanikondalampatti village. CPI state secretary R Mutharasan, MP K Subburayan have also been invited for the event