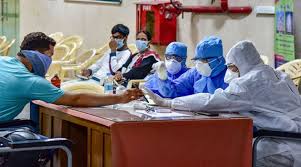 Mumbai: After 47 fresh coronovirus positive cases were reported in Maharashtra, the state surpassed the 500-mark in its COVID-19 tally. The number stood at 537 as of Saturday.

Mumbai recorded the highest number with 28 cases, 15 in Thane district, one in Amravati, two in Pune and one in Pimpri Chinchwad, said the Maharashtra Health Department.

French citizens stranded in Kerala and Tamil Nadu were sent in a special Air India flight to their country, official sources said in Kochi
The Embassy of France had made a request to the Kerala government to facilitate the journey of the French citizens stranded due to the lockdown announced by the Centre to prevent the spread of novel coronavirus.
The French citizens, mostly tourists and those who came for Ayurvedic treatment, were brought here by the state tourism department 24 days ahead of their trip.
They underwent a medical examination before boarding the flight for Paris from Cochin International Airport at 8.13 am on Saturday, officials said.