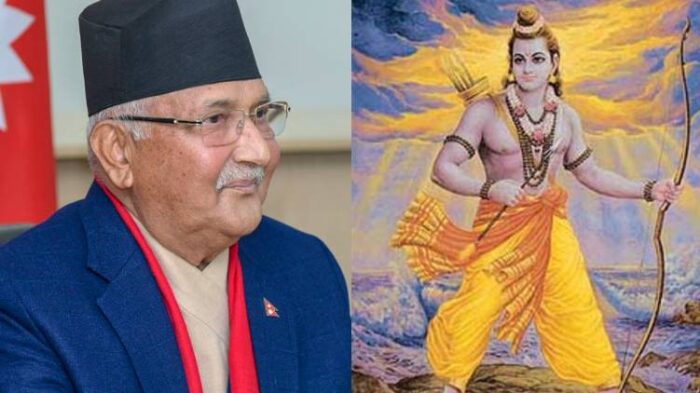 New Delhi: Ayodhya, the ancient city believed by millions of Hindus to be the birthplace of Lord Ram, is actually a small village near Kathmandu, Nepal Prime Minister KP Sharma Oli said Monday, in a statement certain to provoke a reaction from followers of Ram.

The Prime Minister also claimed Lord Ram was actually Nepali. Speaking at a cultural programme at his residence, Mr Oli then accused India of cultural oppression and encroachment, and said Nepal’s contribution to science had been undervalued. “We still believe we gave Sita to Prince Ram but we gave the prince too, from Ayodhya, not India. Ayodhya is a village a little west (of) Birgunj (a district in Nepal that is around 135 km from capital Kathmandu),” Prime Minister Oli said.

We have been oppressed a bit, culturally. Facts have been encroached; he was quoted by Nepali news website Setopati.com. which quoted Nepalese media sources, Mr Oli also said: “Real Ayodhya lies in Nepal, not in India. Lord Ram is Nepali not Indian”. Ayodhya is a town in Uttar Pradesh, around 135 km from state capital Lucknow. Prime Minister Oli’s contentious remarks come amid a row between the two countries over a revised political map that sees Nepal claim Indian territory – the Lipulekh Pass in Uttarakhand and the Limpiyadhura and Kalapani areas.

Last month the Nepal parliament voted, unanimously, to pass a constitutional amendment to update the country’s map to claim these lands. Days later the National Assembly passed the bill, also unanimously. These are highly strategic areas along India’s border with China and have been guarded by the country since the 1962 war. India has responded fiercely to the claims on its territory, dismissing the “artificial enlargement” as unacceptable.

Nepal is well aware of India’s consistent position on this matter and we urge the Government of Nepal to refrain from such unjustified cartographic assertion and respect India’s sovereignty and territorial integrity,” the government said. Nepal claimed the territory under a treaty made with the East India Company during the British period. Back in May Prime Minister Oli also blamed India for the spread of the novel coronavirus in his country. It has become very difficult to contain COVID-19 due to the flow of people from outside.

Indian virus looks more lethal than Chinese and Italian now,” he said. The apparently deteriorating relationship with Nepal has been fiercely criticised by Congress leader Rahul Gandhi, who has often questioned the government’s foreign policy decisions.