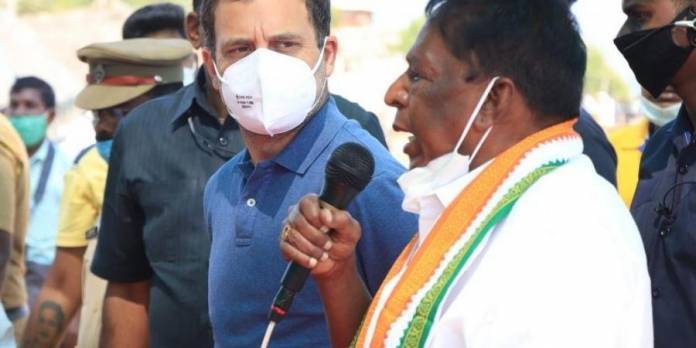 Former Congress president Rahul Gandhi is currently on a two-day visit to poll-bound Puducherry amid political turmoil in the UT. Puducherry Chief Minister V Narayanasamy has landed in a controversy with BJP leaders accusing him of ‘mistranslating’ a fisherwoman’s complaint in front of Congress leader Rahul Gandhi.

Rahul Gandhi interacted with members of the fishermen community in Puducherry on Wednesday. It was during this interaction that a fisherwoman from Solai Nagar complained to the Congress leader that the Chief Minister did not even visit her family in the aftermath of a cyclone. The Opposition in Puducherry claims Narayanasamy mistranslated the fisherwoman’s grievance on purpose.

According to a transcript of the interaction, the fisherwomen told Rahul Gandhi, “The Sea is like this only. Nobody gave as any support. Even him [CM Narayanasamy], did he visit us during cyclone aftermath?”. Puducherry CM Narayanasamy told Rahul Gandhi that the woman said, “During Cyclone Nivar, I [Chief Minister] came and visited the area, I gave her relief. That is what she is telling.”

Asked to respond to allegations that he mistranslated the fisherwoman’s complaint on purpose, Chief Minister Narayanasamy said, “I never misrepresented anything; why are you asking such questions?”

Chief Minister Narayanasamy’s Congress-DMK government fell short of a majority in the 30-member Puducherry Assembly after the resignations of four MLAs earlier this week. In addition, President Ram Nath Kovind on Tuesday relieved Puducherry Lieutenant-Governor Kiran Bedi of her duties and handed the additional charge of the UT to Telangana Governor Tamilisai Soundararajan