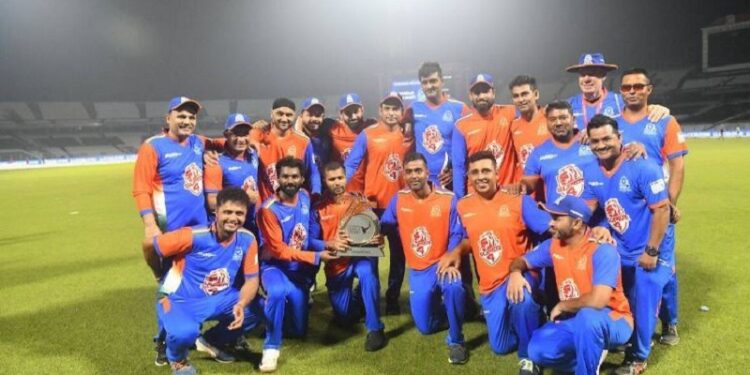 In a special match organized as a part of India’s independence anniversary, India Maharajas won a great victory against World Giants. In this special match held in the Legends Cricket League, the captain of the World Giants team, Jacques kallis, won the toss and chose to bat. Accordingly, former player of Ireland Kevin O’Brien provided explosive start to the World Giants team who started the innings. Legends League Cricket: Big win for Indian Maharajas against World giants.

O’Brien scored 52 runs off just 31 balls with 9 fours and 1 six. In the middle order, former West Indies player Dinesh Ramdin scored 42 runs in 29 balls with 5 fours and 1 six. As a result, World Giants scored 170 runs for the loss of 8 wickets in the scheduled 20 overs. Pankaj Singh excelled by taking 5 wickets for India Maharajas giving only 26 runs in 4 overs. Legends League Cricket: Big win for Indian Maharajas against World giants.

India Maharajas, who got a huge target of 171 runs, did not get off to a good start. Virender Sehwag was dismissed after scoring only 4 runs, followed by Parthiv Patel who conceded the wicket after scoring 18 runs. Mohammad Kaif scored 11 runs and walked out. Tanmay Srivastav and Yusuf Pathan who joined at this stage showed a good partnership.

Tanmay Srivastav, who shared a partnership of 103 runs with Yusuf Pathan for the fourth wicket, surrendered the wicket by scoring 54 runs in 39 balls. Yusuf Pathan continued his thunderous batting for India Maharajas who was already close to victory. As a result, Pathan completed his half-century in 35 balls with 2 sixes and 5 boundaries.

On the other hand, Irfan Pathan, who came in at number 5, scored 20 runs in just 9 balls including 3 sixes. Accordingly, India Maharajas scored 174 runs for the loss of 4 wickets in 18.4 overs and won by 6 wickets. Pankaj Singh, who took 5 wickets for India Maharajas, won the man of the match award. A special trophy was also awarded to the India Maharajas team who won this match to commemorate the Amrita Mahotsav of Independence.