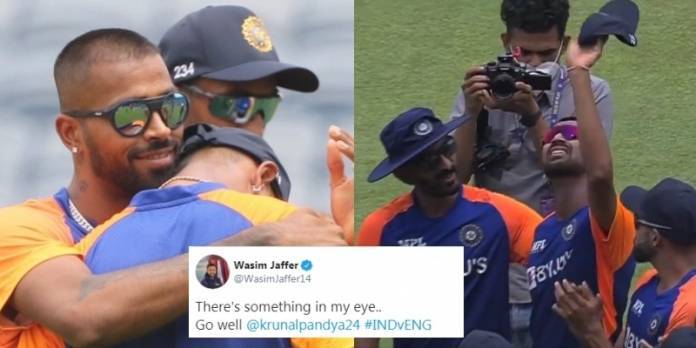 As India took on England in the ODI series opener in Pune, all-rounder Krunal Pandya made his debut for the Men in Blue. Not just Pandya even Prasidh Krishna received his cap for the 1st of the three-match ODI.

Prior to the toss, the Board of Control for Cricket in India (BCCI) shared a video featuring Indian captain Virat Kohli giving a pep talk. Apart from Kohli’s speech, Krunal and Krishna can be seen receiving their maiden caps.

Krunal Pandya, who played 18 T20Is for India, made his first-ever ODI match appearance. The all-rounder can be seen receiving his maiden ODI cap from his younger brother Hardik Pandya.

Upon receiving his cap, Krunal appeared emotional as he looked up remembering his late father. The cricketer was later seen being consoled by his brother as the two gear up for the clash against the World Champions.