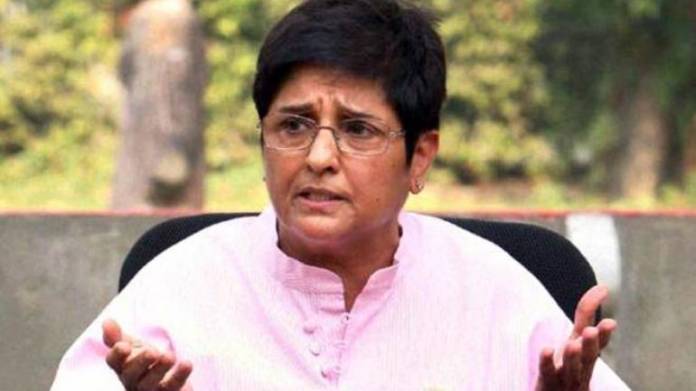 Puducherry: Kiran Bedi has been removed as Lieutenant Governor of Puducherry, a statement released from President Ram Nath Kovind’s office said on Tuesday night. The Governor of Telangana, Dr. Tamilisai Soundararajan, has been given additional charge of Puducherry.

A brief communique issued by Rashtrapati Bhavan spokesman Ajay Kumar Singh said the President has directed that Bedi “shall cease to hold the office of the Lieutenant-Governor of Puducherry”. President Ram Nath Kovind gave the additional charge of the union territory to Telengana Governor Tamilisai Soundararajan “with effect from the date she assumes charge of her office, until regular arrangements for the office of Lieutenant-Governor of Puducherry are made”.

The direction from the President comes amid the political crisis where the ruling Congress-led government has been reduced to a minority after one more MLA quit the party on Tuesday. Bedi and Narayasamy have been at loggerheads over a range of issues. A retired IPS officer, Bedi was functioning till late Tuesday evening and reviewing the COVID-19 vaccination drive in the union territory and issuing directions for bringing in police force and sanitation workers in the frontline worker category for the inoculation.

Amid the political turmoil, the opposition seized the opportunity and demanded the resignation of Narayanasamy, saying his government was in minority. However, Narayanasamy rejected the demand, claiming that his government continued to enjoy ”majority” in the assembly, which is set to go for polls in the next few months. With resignations of four MLAs, the strength of the Congress in the 33-member assembly has been decreased to 10 including the Speaker. Its ally DMK has three members and an independent also supports the government. The opposition has 14 MLAs.

Brahmavara: The dead body of a stranger on a railway track running from Barakoor to Udupi is being suspected as man has committed suicide. The...
Read more
DONT MISS

Banks across the country will remain closed for a total of 11 days in the month of March. This includes the four Sundays and...
Read more
- Advertisment -