News » ENTERTAINMENT » KGF Chapter 2, the first song ‘Toofan’ to be released on March 21

KGF Chapter 2, the first song ‘Toofan’ to be released on March 21 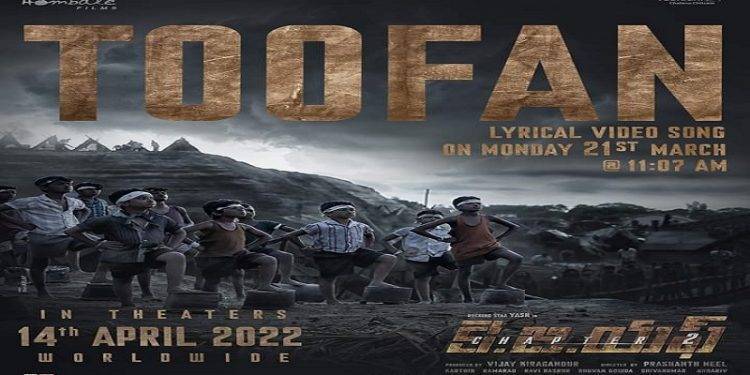 World most awaited movie directed by Prashanth Neel’s ‘KGF Chapter 2’ first song ‘Toofan’, will release on March 21, its makers announced on Friday. The Rocking star Yash movie, which is among the eagerly awaited movies of the year, is scheduled to hit the screens on April 14.

The Rocking star Yash KGF chapter 2 song lyrical music video of ‘Toofan’ is expected to kickstart the month-long countdown to ‘KGF Chapter 2’s release. The producers of the movie, Hombale Films, have said that this song will set the tone for the second instalment of the KGF franchise.

Superstar Yash is back again with the mega canvas action-entertainer, the first part of which went on to emerge as a blockbuster and was the highest grossing Kannada film of all time. The sequel also promises to carry the legacy ahead and outdo itself with a heavyweight ensemble star cast including Sanjay Dutt, Srinidhi Shetty, Raveena Tandon and Prakash Raj.

‘KGF Chapter 2’ will be presented in north India markets by Ritesh Sidhwani and Farhan Akhtar’s Excel Entertainment and AA Films, which are the biggest leading production and distribution houses in the country. ‘KGF Chapter 2’ will be released in Kannada, Telugu, Hindi, Tamil and Malayalam. The movie’s trailer will be launched on March 27.

Very heavy rainfall alert in these states from today