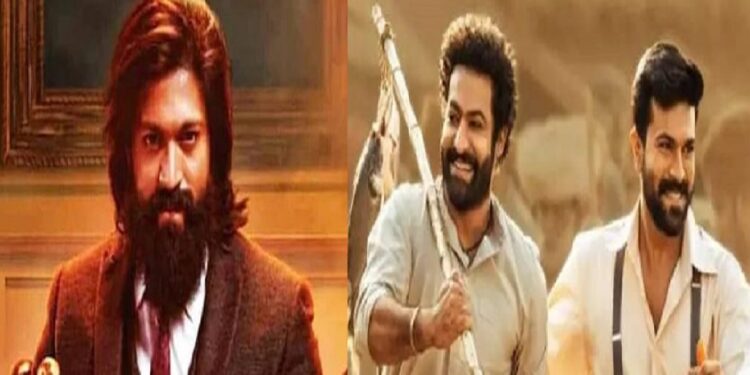 KGF Chapter 2 blast the box office, It is still running in a few centres in its tenth week but they will hardly add to its box office tally and the business is as good as closing. S. Rajamouli’s epic action-drama RRR starring N.T.R. Junior and Ram Charan in the titular role has completed its run at the box office. KGF Chapter 2 and RRR movie final collection.

S. Rajamouli’s N.T.R. Junior RRR movie gross of Rs. 902 crores in India and Rs. 1111 crores worldwide. The film became the second-highest-grossing movie at the Indian box office upon release. It now sits at number three after KGF 2 overtook it last month. KGF chapter 2 Released in April, the film became the third movie in history to take Rs. 100 crores plus on opening day in India. The film KGF Chapter 2 continued to rake in moolahs at the box office for weeks to come, becoming the second-highest grosser ever in India, just behind Baahubali 2, beating RRR by almost Rs. 90 crores.

The film mobilised over 5 crores viewers to cinemas in India, with a final admit count of 5.25 crores approx, the third-highest in the 21st century. The film scored blockbuster numbers universally across the board, which is extremely rare. RRR also did over Rs. 900 crores in India but it was Telugu states that were doing the heavy lifting. It was a similar case internationally, N.T.R. Junior RRR numbers did more than half of its biz in just one market i.e. North America while KGF Chapter 2 did bumper business everywhere whether it was the Middle East, Australia, Malaysia, Nepal or Europe.

RRR opened on March 25th with a record-breaking Rs. 132.30 crores opening day and then followed it with Rs. 341.20 crores opening weekend. The worldwide opening of the movie was Rs. 467 crores and it debuted #1 on the global box office charts that weekend beating the Hollywood tentpole The Batman.

Also Read: Shutdown of government offices and schools from next week

The film went on to become the highest-grossing film in Telugu states, beating Baahubali: The Conclusion with Rs. 394 crores, earning Rs. 239 crores share. The Hindi version of the film put big numbers in North India with Rs. 324 crores entering the top ten grossers ever in the region. Tamil Nadu and Karnataka contributed strongly with Rs. 80 crores each. The film is now available on digital platforms; Netflix and Zee 5 and has garnered record-breaking viewership. The film has reportedly 44 million hours viewed on Netflix in 24 days while over 16M hours on Zee5 for an estimated viewership of 20 million.