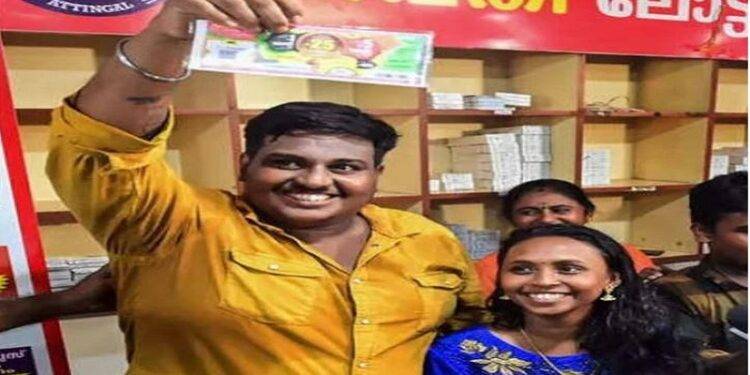 Thiruvananthapuram: An auto driver who had applied for a loan of Rs.3 lakh to go to Malaysia to work as a chef got a prize of Rs. 25 crore in the Onam Lottery Bumper Draw in Kerala drawn on Sunday. Three days before this prize was announced, the financial institution that had accepted his application for Rs.3 lakh had agreed to give him a loan. Anoop, a native of Srivaraham here, bought the winning lottery ticket just one day before the draw date, i.e. on Saturday. Kerala Auto driver won 25 crores in lottery.

He paid for the ticket and was given another ticket first. But when he thought about it, he got a ‘don’t want this, give me another ticket’, said the representatives of the lottery agency that sold him the ticket. Kerala Auto driver won 25 crores in lottery.

Talking about the loan and his trip to Malaysia, Anoop said, ‘I called the bank today regarding the loan. I said that I don’t need a loan anymore. I will not even go to Malaysia,’ he said. Anoop has been buying lottery tickets for the past 22 years. He had won hundreds of rupees many times before. Anoop said that only once was the maximum amount of ₹ 5,000 received.

I didn’t expect to win. I didn’t watch lottery results on TV. Once I checked the SMS, I realized that I had received the lottery. I couldn’t believe it. Showed it to my wife.

After deducting tax, Anoop will probably get a reward of around Rs. 15 crore. When asked what he would do with this much money, he said, ‘I have to build a house and pay off old debts. That is my priority. Besides, Anoop said he will help his relatives, do some charity work and start a hotel in Kerala.

His wife, who was present with him at the agency, told reporters that he had been buying tickets for several years. Khushi shared that ‘many people called and congratulated them after knowing about the win’.