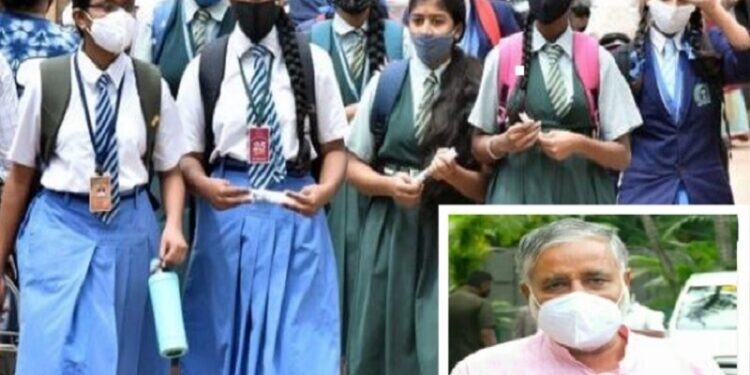 Karnataka on Friday reported 28,723 new Covid-19 cases along with 14 deaths. Bengaluru accounted for 20,121 new infections and seven deaths. With today’s addition of fresh cases, the state positivity rate stood at 12.98 per cent. The total number of active cases in the state is currently at 1,41,337. Government announced school closed classes 1 to 9 till January 31 in state capital.

The Karnataka education department made an announcement to extend school closed in Bengaluru for students of Classes 1 to 9 till January 31 on Thursday. On the coronavirus front, Bengaluru reported 18,374 new cases in the last 24 hours, with the positivity rate reaching 20 per cent. Karnataka has been recording a sharp growth. The Covid-19 positive cases in Karnataka rose by 36.4 per cent, while in Bengaluru, it grew by 32.6 per cent.

Karnataka’s health minister K Sudhakar said media. “Though Bengaluru is the epicentre of the third wave, infections are rising in the rest of the state too.” “Now, in the third wave, cases are doubling every two or 2. 5 days,” he said. “Between January 1 and 11, there were 62,641 active cases and about 6% of them were in the hospital, 1% in Covid-19 Care Centres and the rest 93% were in home isolation,” he added.

Meanwhile, the number of daily cases in the state has increased to two lakh a day. Sudhakar revealed that the vaccination has helped in keeping the hospitalization rate lower. “It is therefore important for everyone to get both doses of the vaccine,” he told media and added “More than 45 lakh people in the state have not taken the second dose yet, although their due date has passed.

Currently, the state has a total of 65 lakh doses of Covid-19 vaccine doses. The coverage of the second dose in the state is nearly 82%.” “After the second wave, 665 oxygen beds and 263 ICU beds have been added in 19 district hospitals at a cost of Rs 25 crore. And, 217 out of 266 PSA (pressure swing absorption) oxygen plants allotted to Karnataka are operational.