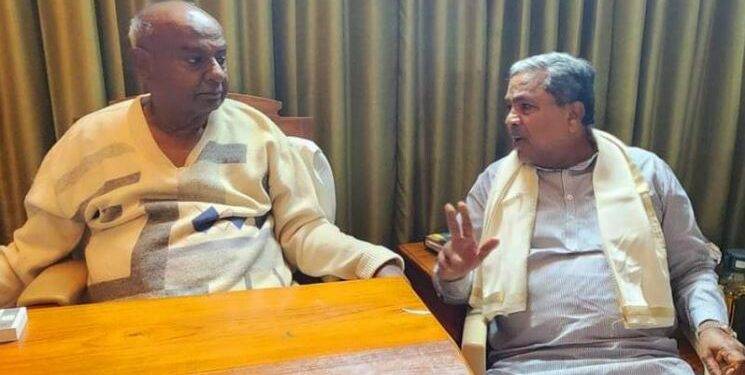 Meanwhile, MLA Jameer and Byrathi suresh supported Karnataka former chief minister. Siddaramaiah, who started his political career from the JDS circle, left the JDS after the Ahinda convention held on 16-7-2005 and joined the Congress and later became the Chief Minister in the Congress.

former prime minister and Rajya Sabha member Deve Gowda has been receiving treatment at home due to leg pain for the past few days, against this backdrop; Siddaramaiah visited Deve Gowda’s home to get information about his health and hoped for a speedy recovery.

Also Read: You can edit sent messages on WhatsApp. Here is the details

We all know that the two who were still identified in the same party, were politically opposed to Siddaramaiah and Deve Gowda due to some reasons. But he forgot everything and got together with the two today and caught everyone’s attention.

Karnataka dasara holiday: The world-famous Dasara is celebrated in Mysuru. As of now, a holiday has been announced for schools in the district from September 26 to October 9 as part of Dussehra. In this regard, the Office of the Deputy Director, Department of Public Education, Mysore has issued a circular. Dasara Holiday: schools holiday start from September 26.

The Dussehra vacation period for the academic year 2022-23 has been fixed. Mysuru Dussehra Navratri events are starting from 26-09-2022. And on the condition that Mahatma Gandhi Jayanti on 02-10-2022 and Valmiki Jayanti on 09-10-2022 be compulsorily celebrated in schools, an order from the Deputy Director of Mysuru District Public Education Department to grant Dasara holiday from 26-09-2022 to 9-10-2022 for the benefit of children.

According to the 2022-23 academic calendar of the Department of Public Education, Karnataka Dasara holiday has been granted from October 03, 2022 to October 16, 2022, for a total of 14 days. This leave is given every year for students to study for half yearly examination. In the academic year 2022-23, there will be a total of 60 public holidays and 270 will be school open days. Dussehra holiday starts from October 1 in other parts of Karnataka.