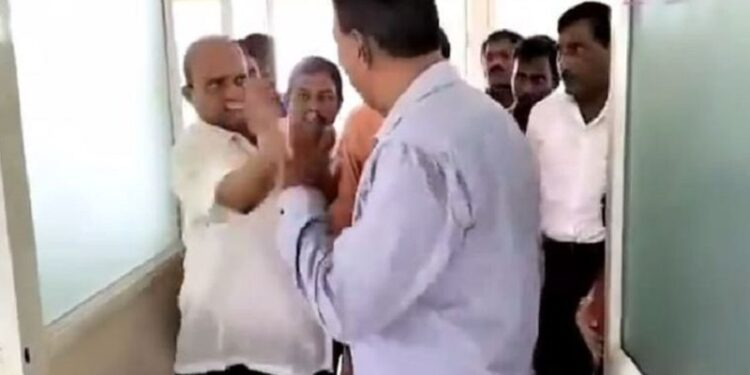 The incident, which happened on Monday, has created a huge outrage among the public. M. Srinivas, Janatha Dal Secular (JDS) MLA from Mandya, repeatedly slapped the Principal of Nalvadi Krishnaraja Wadiyar ITI College front of public.

Shambhu Gowda, the President of the Government Employees Association Mandya District, on Tuesday said that the matter will be brought to the notice of the District Commissioner. Gowda called emergency meeting of the association and took details of the assault on the Principal. He also met the Principal Naganand and took details of the incident and assured him of full support.

The video of the incident has gone viral on social media. People have slammed Srinivas for treating the principal with no respect. According to eyewitnesses, Srinivas got infuriated as the Principal Naganad could not give information on the work in laboratory during the inauguration of the renovated ITI College.

The JD(S) MLA scolded him, made awkward face and slapped him twice in front of his colleagues and local politicians including a woman. The video shows the principal in shock and awe while public is trying to placate the MLA.